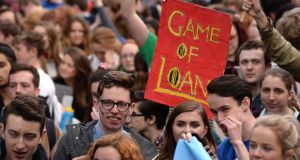 Minister for Education Richard Bruton says it is not yet possible to say how much a student loan scheme for higher education will cost. Photograph: Dara Mac Dónaill/ The Irish Times

Minister for Education Richard Bruton said it was not possible to say how much a student loan scheme for higher education would cost as work was only now beginning on a detailed economic analysis.

It is almost two years since the Cassells report on the future funding of higher education was published and recommended urgent changes to ensure the system was “fit for purpose”.

These options included an income-contingent loan system; a “free fees” system for all students; or retaining the existing €3,000 student registration fee.

In a letter sent recently to the Oireachtas committee on education, Minister for Education Richard Bruton and Minister of State Mary Mitchell O’Connor state that the department is to commence an economic examination of these options.

In addition, it states the review will consider broader questions such as the appropriate mix of apprenticeship and upskilling programmes and how skills gaps in the economy can best be met.

“My department will now commence this process. This constitutes a significant body of additional work and it is not possible at this stage to give a timescale for its completion,” the letter states.

“This will need to be considered by the department in the context of resources required to undertake this project.”

The letter was a response to the committee’s request last January for an economic analysis of the three funding options.

Mr Bruton has avoided stating any preference for options outlined in Cassells and, instead, has asked for the committee to build a consensus on a future funding option.

Taoiseach Leo Varadkar has ruled out a UK or US-style loans scheme which could saddle graduates with large amounts of debt, but has left the door open to Australian or Dutch-style loan schemes, which involve much smaller loans.

Under such a system, college would be free at the point of access and graduates would repay their fees when their incomes reach a set threshold.

Most Opposition parties have ruled out any form of student loan scheme. Fianna Fáil, which was originally open to such an approach, has cooled considerably in more recent times.

Controversy over the level of debt facing graduates in the UK, in particular, has helped shape the views of many political parties.

The letter from Mr Bruton and Ms Mitchell O’Connor states that it will be “helpful” for the committee to “continue with its work in building as much of a consensus as might be possible on future funding of the sector”.

The letter also states that it is the intention of the Government to continue to “re-invest in higher education through increased public funding” and through a new levy on employers.

This employers’ PRSI levy is due to rise from 0.8 per cent to 1 per cent over the next two years.

In late 2016, Peter Cassells, speaking before the education committee, called for action on investment given that the current funding model was “broken” and the status quo was no longer an option.

He said the current system failed to recognise the demographic bulge which will see the number attending third level rise by up to 30 per cent over the next decade or so.

“It also fails to fully recognise the pressures on families and students, not just because of the €3,000 fee, but also the high living and maintenance costs associated with studying and successfully progressing through college,” he told the committee at the time.