DIT expansion of Grangegorman campus to create up to 1,300 jobs

Construction set to start on new buildings for more than 10,000 students and 600 staff 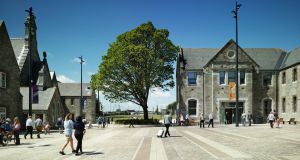 Up to 1,300 jobs are set to be created over the next two years after a new phase in the development of DIT’s campus at Grangegorman received the green light.

Construction of two substantial academic buildings on the campus is set to begin shortly with the aim of having them ready for September 2020.

This will bring more than 10,000 students and 600 staff together on the new campus.

The new buildings will accommodate students in DIT’s colleges of science and health, arts and tourism, along with the school of electrical and electronic engineering.

This will mean more than half of all current DIT activities will be based on the new campus.

It is estimated it will take up to eight years or so before the the campus is complete with more than 20,000 students on-site.

This phase of the development is being financed mainly through loans from the European Investment Bank worth about €110 million.

The construction consortium involved says it is ready to commence work on the site this week.

Over the next two years, DIT estimates the number of jobs created on-site will range from between 500 and 1, 300.

The contract stipulates that significant numbers of workers should be drawn from local areas.

“The development of the Grangegorman campus has the power to add new life and opportunity – culturally and economically - in the heart of Dublin City,” said president of DIT Prof Brian Norton. The development, he added, will lead to the consolidation of DIT in in this location within the next four years.

DIT is widely expected to become the State’s first technological university following its merger with IT Blanchardstown and IT Tallaght.

Minister for Education Richard Bruton said the project formed part of a much wider investment in higher education.

Minister for Finance Paschal Donohoe said the “positive impact” the Grangegorman development was having on the surrounding areas of inner city Dublin is already evident.

“ Today’s announcement represents a significant step forward in realising the full potential of the Grangegorman site as a hub for high-quality education and health facilities, as well as for community activity.”