Move follows campaign led by students, which said the proposal was unfair and undemocratic 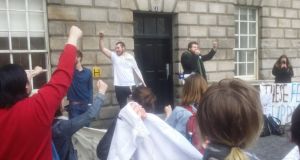 The decision was announced to cheering students during a lunchtime protest organised by the #TakeBackTrinity campaign. 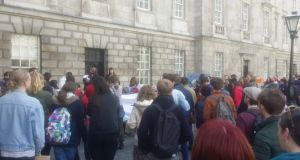 The decision was announced to cheering students during a lunchtime protest organised by the #TakeBackTrinity campaign.

Trinity College Dublin has decided to drop plans for the introduction of supplemental examination fees after a campaign led by students, which said the proposal was unfair and undemocratic.

In a statement issued on Wednesday, the college said the board of Trinity College Dublin agreed with a proposal made by the Students’ Union “to return to the status quo regarding modular billing and fees for taking supplemental assessments.”

It added that the decision means that “there will be no fee charged for supplemental examinations.” The statement was issued following a meeting of the board which TCD Provost Dr Patrick Prendergast promised would consider alternative proposals made by student representatives.

A committee composed of students and college officials will now examine alternatives to the proposal and report back in a year’s time.

Reporting that the Board has accepted the students’ proposals on modular billing & fees for supplemental repeat examinations, as well as new proposals for PG/Non-EU #TakeBackTrinity #FeeCertainty. pic.twitter.com/aM4FhW9IgC

Plans to introduce a supplemental fee of €450 for examination resits sparked a series of demonstrations by students in recent weeks under the banner #TakeBackTrinity. The demonstrations included a three-day occupation of a building in the university’s Front Square and a number of impromptu closures of college gates.

The demands of the #TakeBackTrinity campaign include the scrapping of proposed supplemental examination fees; the introduction of affordable rental options for students and that student fees not be increased.

The college board also agreed on Wednesday to give ‘fee certainty’ to postgraduate students and other students in order to give advance notice of how much their fees will increase during each year of their studies.

The reversal came after a week-long series of meetings between the board and student representatives. Dr Prendergast said: “I undertook that we would seriously consider alternative proposals, and we have done so”.

“I look forward to continuing the dialogue with student representatives to find a solution to the issues confronting Irish higher education, taking account of both fairness to all students and the College’s financial position. I would like to thank everyone who has contributed so far,” he added.

The decision was announced to cheering students during a lunchtime protest organised by the #TakeBackTrinity campaign against the proposed new supplemental examination fee. The protest, which was held outside the building where the board was meeting, was addressed by People Before Profit TD Bríd Smith and Solidarity TD Paul Murphy.