Brian Mooney recognised at Teacher of the Year Awards 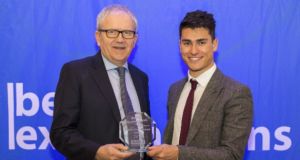 Brian Mooney, guidance counsellor and Irish Times columnist, has been recognised for his lifetime contribution to education at the National Teacher of the Year Awards.

The ceremony, held at Trinity College Dublin, celebrates outstanding contributions by second-level teachers who go “beyond the classroom to establish a lasting impact in their students’ lives”.

Mr Mooney was given a lifetime achievement award for his work in helping to guide generations of students on their career paths, as well as his contribution to education policy.

In a citation, he was described as being “ deeply embedded in the fabric of education in Ireland” through his career advice in The Irish Times and on TV and radio, as well as his work as managing editor of the Education Matters yearbook.

Mr Mooney is a former president of the Institute of Guidance Counsellors and previous worked as programme director and lecturer on the master’s and higher diploma in religious education at UCD.

Other winners included Margo Whelan of Coláiste Bríde, Enniscorthy, Co Wexford who was awarded under the best principal/vice-principal/year head category.

Gemma Buicke of Pobalscoil Neasáin in Baldoyle, Dublin was awarded for her contribution to the promotion of science, technology and maths (Stem) education.

Tony Keenan of Our Lady’s College in Drogheda, Co Louth was recognised for his contribution to student wellbeing.

Aisling Sheerin of Rathdown School, Co Dublin was the winner of the “different ways of learning award”, while Emily-Anne Doyle of FCJ Secondary School, Bunclody, Co Wexford was given the award for “most engaging in the classroom”.