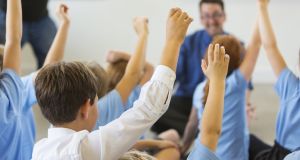 The education committee’s reports released on Thursday also call for the introduction of generic uniforms without badges, greater support for parents struggling to shoulder the burden of back-to-school costs, and an awareness of pressures faced by school principals. Photograph: iStock

The disadvantaged (Deis) school scheme has failed to resolve the State’s “unfair and unequal” education system under which children from less affluent backgrounds are “destined to struggle,” the Oireachtas education committee has warned.

The education committee’s reports released on Thursday also call for the introduction of generic uniforms without badges, greater support for parents struggling to shoulder the burden of back-to-school costs, and an awareness of pressures faced by school principals.

Citing a number of recommendations from the report on educational inequalities and barriers, Senator Lynn Ruane, warned that the unequal distribution of income and wealth across the Irish education system was reproducing social class inequalities.

Under the current system travellers, lone parents, people who have disabilities, who are homeless, or who are in the care of the state, asylum seekers and those from less affluent backgrounds are destined to struggle, she said reading from the report. “They are more likely suffer homelessness, criminality and mental illness as a direct result of inequality of access to good quality education.”

While the Deis scheme (Delivering Equality of Opportunity in Schools) and other supports attempt to help those who are disadvantaged, it is clear that this supplementation process is “inadequate” and in some cases reinforces the class divide, said the report.

Ombudsman for Children Dr Niall Muldoon called on the committee to ensure all Government departments play a role in supporting and developing communities where Deis schools are located and not only focus on the school in isolation.

He commended Deis schools for their work but cautioned that when a young person finishes their education and walks back into a community suffering high unemployment and addiction issues all the benefits of a supportive school environment are jeopardised.

“What we need to do is give the individuals support when they go home, when they go out into part time employment, recreation, clubs; all those extra supports that other communities have without even thinking about it need to be there as well,” Dr Muldoon told The Irish Times.

“It needs to be a whole of government approach that once somewhere is nominated as Deis the community is flooded with support and help. That way we can say after 10-15 years we should expect everybody to be out of the Deis scenario.”

Fianna Fáil justice spokeswoman Fiona O’Loughlin said the report into school costs and facilities sought to highlight the pressures faced by school principals while analysing the “ever-increasing school costs”, particularly around back-to-school time and during transition year. She warned that some parents were forced to cut back on food and turn to money lenders to meet school costs each year.

Generic uniforms without badges, including sports and gym gear, should be introduced to help address this financial burden while funding for the school book rental scheme should be increased by €20 million in the upcoming budget with a view to introducing an entirely free school book scheme in the longer term, says the report.

The report also calls on the Government to restore capitation rates to 2010 levels while incrementally increasing funding to schools so that all children have access to a high-quality, free education system.

According to Barnardos, it would cost an extra €103 million to deliver free primary education to all children and an extra €126 million at secondary level, a fraction of the department of education and skills’ annual budget, concludes the cost and facilities report.