Amy Richards: ‘I have no idea what I wrote, I don’t know if it was complete gibberish’ 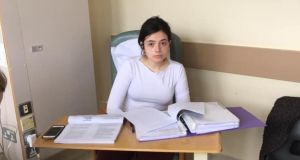 Amy Richards first visited the doctor with pain in her abdomen about a week before the State exams began. She was told not to worry and that she was suffering symptoms of stress and irritable bowel syndrome.

The 18-year-old slept for three hours following the surgery at Wexford General Hospital before her mother, at Amy’s request, woke her at 7.30am so she could cram before the exam.

At 9.30am she sat down at one of the hospital dinner tables, picked up her pencil and started writing.

“I have no idea what I wrote, I don’t know if it was complete gibberish,” she said. “During English paper 2 and maths paper 1 the nausea was horrific. The exams were interrupted on numerous occasions so I could receive pain medication and have my drip changed.

“I was trying to write but all I could think about was getting sick. I had to end both exams early and ended up on the bathroom floor getting sick.”

Amy first visited the doctor with pain in her abdomen about a week before the State exams began. She was told not to worry and that she was suffering symptoms of stress and irritable bowel syndrome.

A few days later she was back with a GP, who immediately sent her to a hospital emergency department.

“I don’t think I’ve cried so much in my life as I did that Tuesday. I was frustrated to be missing so much time for studying and when the doctor told me I had to go to hospital I had a panic attack and couldn’t breathe,” Amy says.

“When I was told at 7pm that I had appendicitis I didn’t care, I just wanted to sit the exam. I was devastated, English was one of my strongest subjects and I needed it to get the high points for medicine.”

When the severity of their daughter’s condition became clear, her parents contacted her school and the State Examinations Commission asking whether she could reschedule and sit the exams in July with pupils who suffer a bereavement during the Leaving Cert. Their request was refused.

Having sat the HPAT, an aptitude test for medicine applicants, earlier in the year and being determined to secure the high points needed to study medicine, Amy insisted on sitting the first three exams in hospital.

After being discharged, she sat the remaining exams in a private room in her school during which time she remained on heavy medication including a strong painkiller and anti-nausea medicine.

“At the end of the exams I had no sense of achievement. I don’t think people understand how wrong it is to force a child to sit the most important exam of their life when they’re extremely ill,” she said. “The surgeon had told my Mum I was lucky to be alive. If someone’s life is threatened they’re not fit to sit an exam.”

Amy has resigned herself to the reality that she may not have done as well as she hoped in the exams. She is looking into medical courses abroad and if she secures enough points, may study science at an Irish university. She is also considering repeating sixth year, but would have to learn an entirely new two-year syllabus for English and music.

In a letter printed in today’s Irish Times, Amy calls on the Government to end the “unjust and archaic” examinations system, arguing that students who face a medical emergency should be allowed to defer exams along the lines of the scheme brought in this year for bereaved students.

A Department of Education spokesman said a new pilot scheme had been introduced to allow Leaving Cert students who suffer a close family bereavement during the exams to sit alternative papers in July.

Any extension of this would need to take into account the difficult life circumstances some students encounter during exam time, but also the need to be fair to the majority of students sitting exams and “to maintain the integrity of the examinations process”, he said.

A spokeswoman for the State Examinations Commission said it was scheduled to undertake a “comprehensive review” of how best to support students experiencing “all forms of trauma and adversity” at exam time.

She added that “every possible effort” was already made to accommodate students who experience accidents, illness or other trauma either immediately before or during examinations.