Al-Maktoum family will have no control over new educational centre, Trinity College says 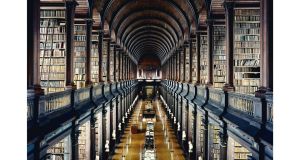 Trinity College Dublin has refused to reveal how much money is being donated by the Al Maktoum Foundation for the establishment of a new centre for Middle Eastern studies at the university.

The foundation is owned by the ruling royal family of Dubai, which has been accused of human rights abuses.

The university’s Al Maktoum Centre for Middle Eastern Studies, which will form part of Trinity’s faculty of arts, humanities and social sciences and was announced on Monday, was originally set to receive a donation of €5.5 million over a period of a decade. However, a Trinity spokesman has said this was no longer the case and that the foundation was not willing to disclose publicly how much money would be donated.

He said the centre’s teaching and research would focus on history, culture, society and languages in the Middle East with a particular focus on the Arabic language but added that the Al-Maktoum family would not be involved in recruitment or have any control over the new centre.

Asked whether the university had expressed misgivings around alleged human rights abuses, former Trinity board member and professor of economics Brian Lucey said the ruling classes of Dubai were “not the worst” when it came to seeking funding for educational purposes.

“It would be lovely if we could get money from the Dalai Lama but the reality is the money has to come from somewhere. In the hierarchy of people from whom we would accept money, the ruling classes of Dubai are not the worst.”

In March 2018 Princess Sheikha Latifa, the daughter of Sheikh Mohammed bin Rashid al-Maktoum, was forcibly returned to the United Arab Emirates after she tried to flee the country.

More recently, Human Rights Watch criticised the UAE in its 2019 World Report for its “sustained assault” on freedom of expression, its leading role in the Saudi-led coalition operating in Yemen, its treatment of migrant workers in the country, discrimination against women and criminalisation of same-sex relationships. The group also criticised the UAE for continuing to block representatives from human rights organisations from visiting the country.

Trinity College provost Dr Patrick Prendergast said the “generous gift” from the Al-Maktoum family had come at a time when Irish society must “seize the opportunity to enhance the role which all can play in a pluralistic society”.

Minutes from a January 2016 Trinity College board meeting show the then proposed Al Maktoum Centre would be “the culmination of years of discussion and negotiation” with funding from the foundation spanning a 10-year period.

Prof Juergen Barkhoff, head of the school of languages, said at the time that the centre would be “entirely secular in its approach with religion research in terms of its effects on the cultural, historical and political development of the regions only”. The meeting also notes that the Al Maktoum Foundation would take “a hands-off approach to the direction and management of the centre”.

Chairman of the board of trustees of Al Maktoum College and the Al Maktoum Foundation his excellency Mirza Al Sayegh said the centre would continue the Dubai family’s long commitment of investment in both education and Ireland.

A statement from Trinity noted that the foundation’s work was “internationally recognised for its focus and contribution to the promotion of understanding and peace across cultures for its humanitarian work, notably in education”.

The Al Maktoum Foundation funds the Islamic Cultural Centre in Clonskeagh, Dublin and is an Irish registered company with charitable status which is funded by large annual grants from the UAE’s ruling family.

It also funds the Al Maktoum College of Higher Education in Dundee, Scotland which came under fire in 2012 after the former principal took a claim against the college for unfair dismissal and discrimination.

The employment judge ruled in the college’s favour.