Most afterschool services not affected by new staffing rules – department 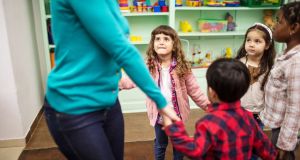 According to the Department of Children, 85 per cent of school-age childcare services operate within the new 1:12 adult-child ratio. Photograph: iStock

Most school-age aftercare services will not be affected by new staffing rules which it has been claimed will result in steep hikes for parents, according to the Department of Children.

Some childcare providers have warned in recent weeks that aftercare costs for schoolchildren will jump by up to 40 per cent due to regulations which will oblige them to have one adult for every 12 children on their premises.

However, the Department of Children has released the findings of a sample of 400 school-age childcare services which indicate that average staffing ratios are one adult for every nine children. As a result, it says these will be unaffected by the new rules.

It adds that some 85 per cent of school-age childcare services operate within the new 1:12 adult-child ratio.

A separate survey by county childcare committees across 10 local authority areas also indicates that 79 per cent of school-age services operate within the ratio of one adult for every 12 children.

While some childcare providers have warned that the new rules could lead to services reducing places on offer, the same survey indicated there would be more than 500 new places in these local authority areas.

A spokesperson for Minister Children and Youth Affairs Katharine Zappone said that “overall” it did not expect to see an increase in “average” school-age childcare fees.

However, Seas Suas, a representative group for independent early education and childcare providers in Ireland, insists the changes will have a major impact on childcare services and parents.

It says it will lead to many afterschool settings being forced to reduce the number of places available to parents, severely impacting drop-off and collection services to schools. This, it says, will result in the possibility of a considerable increase in fees.

“The legislation will increase the number of staff required in afterschool settings at a time when the sector is experiencing a severe shortage of qualified early years educators,” the group said in a statement.

“The staff shortages are already significantly impacting on any expansion to cater for the increase in economic activity in the country.”

It said many providers were currently unable to fill staffing vacancies to meet current demand.

The department has announced that it is holding consultations with any concerned stakeholders over the changes ahead of their introduction in the new school year.

It has also pointed out that the new 12:1 ratio was recommended by independent experts, including representatives of providers.

However, chairwoman of Seas Suas, Regina Bushell, said many of the stakeholder organisations consulted so far were “funded, in the main, by the Government” and were not directly involved in the delivery of services.

“We have arrived at a point where providers, parents and some politicians have voiced concerns that the new legislation is un-implementable. While we hope that the current consultation process may improve matters, many would see it as being too little too late,” Ms Bushell said.

The new rules relate to aftercare operators that are participating in the State’s new national childcare scheme.

This provides income-based subsidies to parents who are availing of aftercare for school-aged children.

Under the scheme, parents with a net income of less than €60,000 a year are entitled to means-tested subsidies of up to €145 a week per child.