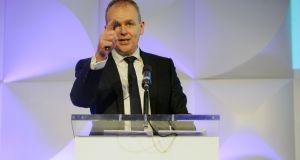 Minister for Education Joe McHugh is hosting a symposium with education stakeholders on Wednesday on initiatives to strengthen small schools. Photograph: Aidan Crawley

Dozens of primary schools have either closed or had to amalgamate over the past five years amid concern for the future viability of small schools in rural areas, latest figures show.

Minister for Education Joe McHugh is hosting a symposium with education stakeholders on Wednesday on initiatives to strengthen small schools which he said were often the “heartbeat and lifeblood of a community”.

Almost half of the State’s primary schools are defined as small with four teachers or fewer. However, they account for just 15 per cent of the primary school population. Most are based in rural parts of counties on the western seaboard.

The decline is linked to a range of factors such as schools opting to come together to survive or closures linked to falling pupil numbers, increased urbanisation or commuting patterns.

In a statement, Mr McHugh said the Government was committed to supporting and strengthening small schools to move from “surviving to thriving”.

“Small schools can and do provide an excellent education to our children, right in the heart of their communities,” he said.

“I went to a small school as a child. I live in an area where small schools are a facet of life and that is replicated up and down the country. They are often the heartbeat and lifeblood of a community.”

Prior to the recession, these rules were generous and allowed a third teacher to be appointed with an enrolment of 48 pupils and a fourth teacher with 78 pupils. The union says some teaching principals find themselves increasingly professionally isolated as a school’s pupil number drops below the threshold for retaining other teachers.

The union also says there are major pressures on principals in smaller schools, who must juggle the demands of teaching multiple class levels while also taking care of the administrative requirements of the school.

“The number of policies a school is required to develop and regularly review is the same for the smallest schools in the country as it is for the largest,” the union said in a statement.

The Catholic Primary Management Association (CPMSA) has called for a leadership and management day a week for teaching principals. The association wants full reversal of austerity-era cuts to the capitation grant and a planned schedule of increases into the future.

Mr McHugh said the Government had helped to ease pressure on small schools through moves on pupil-teacher ratios in recent years, and the allocation of a second adult in schools with a single teacher.