Half a billion euro surplus in State training fund ‘unacceptable’ 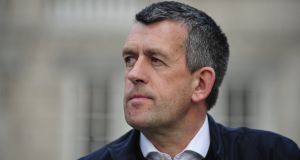 Maurice Quinlivan: ‘It is absolutely scandalous that this money has not been invested in raising the skills of those in employment.’ Photograph: Aidan Crawley

The Government has been criticised for running a “scandalous” unspent surplus of about half a billion euro in a State training fund.

Latest figures show the projected underspend for the National Training Fund – an employers’ levy aimed at supporting the training of those in employment – this year will be almost €200 million.

From 2015 to 2018, the fund has consistently recorded large surpluses, amounting to €300 million.

Sinn Féin’s spokesman on business Maurice Quinlivan said it was “totally unacceptable” to have such a large surplus at time when there was a growing skills shortage across key areas.

“It is absolutely scandalous that this money has not been invested in raising the skills of those in employment, helping jobseekers upskill and facilitating lifelong learning, the actual purpose of the fund,” he said.

Mr Quinlivan noted latest CSO figures show 28,800 young people are out of work. He said more funding should be directed to try and help them get back into the workforce or support them in further education, training and apprenticeships.

He also said the apprenticeship system in Ireland was in “dire need” of reform and expansion to ensure young people have options other than third level.

A spokesman for the Department of Education, however, said there has been a significant increase in investment training from the fund over recent years.

In 2019 alone, he said, a total of €485 million was being invested in programmes to meet the skill needs of the economy, support unemployed people in their journey back to work and assist those in employment to acquire new skills.

This additional investment is set to result in apprenticeship registrations expanding by 1,200 and an increase the number of trainees by 1,100.

In addition, a new “human capital initiative” – also funded from the training fund – will see a total of €60 million a year invested over five years to support expenditure at third level and further education, as well as the development of labour market skills.

This measure allows for additional expenditure of €47.5 million from the National Training Fund in 2018 and €70 million in 2019 under EU fiscal rules.

Following issues raised by employers during a consultation process, a number of key reforms to the training fund were introduced to make it more responsive to employer needs and to give employers a greater say in informing priorities for the fund. This has proved controversial, with trade unions arguing that businesses are being given too much say in directing where education and training spending is going.