Ireland’s small schools: Inside the battle for their future

Ireland has an unusually high number of small schools, but many face an uncertain future 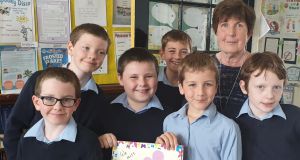 Iseult Mangan, principal of Cloghans Hill National School, Co Mayo, does not need to do a roll call each morning. Instead, she simply has to look down the classroom to see if all her six pupils are there.

There are, she says, many advantages for children who learn in a one-teacher school. Her pupils – who range from third to sixth class – get a chance to do more independent learning.

Two of them are national coding champions, even though it is not on the curriculum. It’s also very social: the classmates, she says, are well and truly friends for life.

“They don’t miss out on anything,” she says. “We’re a green flag school, a GAA school of excellence ... To be honest, I think a small school like this is the best thing ever.”

But there are disadvantages, too. A few months ago she collapsed in class and passed out. The pupils began to panic. What would they do? How could they resuscitate her? Who would they contact?

Luckily, a part-time special needs assistant was present. Mangan came around quickly and ended up being admitted to hospital for emergency surgery for internal bleeding – but not before waiting for parents to collect their pupils.

“It was that or cancel school and ask the parents to collect their children early,” she says.

Mangan has put her heart and soul into the school, but it has been a losing battle. Rural depopulation and younger families moving out of the area means there are no school-age children local. The local shop has closed. So too has the post office. In two years time, the school will do so.

“It was a heart-breaking decision,” says Mangan. “ I’ve given it my all. The kids used to think I slept there at night ... It’s not that I couldn’t get pupils – there are none locally.

“Some of those coming here are driving past other schools to come here. So, it’s just not sustainable,” she says.

The story of Cloghans Hill National School isn’t unusual. Dozens of primary schools have closed or amalgamated over recent years, as concern grows over the viability of small rural schools. Many are more will close in coming years.

Ireland, however, has the highest proportion of small schools in Europe. Nearly half have four teachers or fewer. However, they account for just 15 per cent of the primary school population.

Most are in the west, where the population is static or falling, and getting older. But there are also local dynamics at play, commuting and job patterns, or whether parents want or hate to see their children educated in small schools.

The death of many rural schools is explained by the sad legacy of history. Urbanisation and rural depopulation are a fact of life right across the globe.

This week Minister for Education Joe McHugh held a symposium on how small schools can move from “surviving to thriving”. Yet his department in 2013 earmarked 200 small schools for potential closure.

Sometimes there are extraordinary numbers of schools close to each other. On Achill island alone, for example, there are eight primary schools. Each of them have small numbers of pupils.

In its 2013 report, the Department of Education concluded: “There is no evidence that small schools provide any greater educational benefits for their pupils which would offset their greater costs.”

However, closure or amalgamation provokes strong emotions. The school – along with the pub and the post office – is seen as the beating heart of communities. Little wonder, then, that the Government sat on the report for two years.

The findings were quickly dismissed by Ministers, After all, there are no votes in closing schools. Today schools are closed only with the consent of parents or its board of management.

But it is really sustainable to keep so many open?

Alan Wall, an assistant secretary at the Department of Education, says Ireland is not alone in grappling with these issues: Scotland, New Zealand and Australia have similar troubles.

The issue is “beautifully complex”, he says. Sometimes, parents bring children with them to local towns where they have found work. Sometimes the traffic goes in the other direction, with parents wanting small classes.

But in the eyes of teacher unions and school principals, relatively simple fixes exist. The Irish National Teachers Organisation says small schools were disproportionately hit during the austerity years.

When a small school’s pupil numbers drop below the threshold for retaining other teachers, it can quickly end up in a downward spiral as parents opt to send children elsewhere.

The pressures facing teaching principals today are acute, says the Irish Primary Principals Network’s chief executive, Pairic Clerkin: “The small school today is a very different animal to the small school of 20 or 25 years ago.”

They must juggle teaching different classes, different abilities and special need cases, and take care of mountains of paperwork. They need more support, he argues.

Management training is needed, says the Catholic Primary Schools Management Association. McHugh signals that he is involved in “intense discussion” on these issues ahead of the 2020 budget.

It is unlikely that a silver bullet exists. Most schools will have to rely on their own imagination and drive to try to attract pupils. Derryoober National School in southeast Galway is one example.

The school, overlooking Lough Derg, is just a few kilometres from the Co Clare border. It was founded more than 160 years ago, and once had 100 pupils. Some years ago it dropped to single figures. The prospect of closure loomed large.

“The school is the last bastion of identity in the rural area,” says Pádraig Lohan, who has taught there for 30 years. “We lost the pub, our GP, the local centre, we’ve lost an awful lot ... ”

The community came together. Instead of accepting closure, they pledged to keep it alive.

A childcare and after-school facility was built that summer to encourage commuting parents to use it. By the following September eight children started school, which got numbers above the threshold for a second teacher.

Six more are enrolled for next September. If current trends continue, the school will have a third teacher soon.

“Nowadays the school opens at 7.30am and the after-school goes on until 5pm,” says Lohan.

“We have a breakfast club. We are introducing a hot dinner from a local restaurant for the afterschool. On Monday mornings we have music, yoga and gymnastics. On Tuesday we have swimming. On Wednesdays we have hurling.”

The death of rural primary schools is not a given, he says. “It has come full circle now and people are delighted the school is open. We have people actually coming back to the community.”