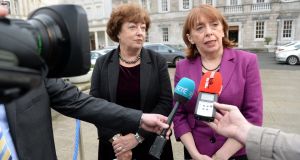 Róisín Shortall (right) said ‘no effort’ being made to check whether schools are cutting costs for parents. File photograph: Cyril Byrne

Schools have not yet received any of the financial rewards promised under an ambitious plan to encourage them to cut the cost of school uniforms and books.

Significantly, schools that introduced the new cost-saving measures – such as book-rental schemes or uniforms with iron-on crests – were told they would receive a “premium capitation payment”.

However, the Department of Education has confirmed that schools are not being actively monitored to determine if they are reducing costs. In addition, no school has yet received any extra payment.

Róisín Shortall TD, co-leader of the Social Democrats, said it was clear the department was making “absolutely no effort” to track whether schools were reducing costs for parents.

“What’s the point of introducing an incentive-based scheme when the incentives are non-existent? The losers here are parents who have very little say in relation to school policies about books and uniforms, yet have to foot the bill,” she said.

In response, a department spokeswoman said all schools were expected to carry out the provisions in the circular.

“It is intended, as resources permit, to reward schools that can provide evidence of having adopted the principles of cost-effective practice,” she said, adding that this could be done through some premium in capitation grants. “This remains the intention and will be considered in future budgets.”

Ms Shorthall, however, said there was little likelihood of costs being eased for parents any time soon.

The department’s response to Ms Shorthall’s parliamentary question on the matter states that a decision will first be required on restoring capitation over a three-year period before looking at premium payments for schools which are cutting costs for parents.

Only then will the department consider the “most appropriate mechanism to gather evidence” on whether schools have adopted cost-effective practice.

Mr Bruton’s circular last year provided a list of the cost-saving measures his department would favour. They included ensuring all elements of a school uniform can be purchased from various stores, mandatory book rental schemes and a ban on workbooks which cannot be reused.

Despite a system of “free education”, parents face hefty costs for books, uniforms and voluntary contributions. The children’s charity Barnardos says much of this is down to the underfunding of the education system and Government spending cuts.