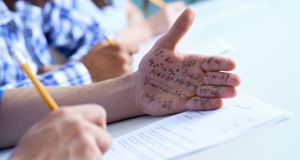 Results have been withheld from 80 students this year compared to 72 at this point last year - an increase of 11 per cent. File image: iStock

Eighty students who sat the Leaving Certificate examination this year have not been given their exam results over fears they may have cheated.

The State Examinations Commission (SEC) has confirmed results are being “permanently withheld” from 43 of these students and it is still investigating the cases of a further 37 students whose results have not yet been handed out.

The commission declined to say what form of cheating may have occured, though informed sources say use of smartphones, production of identical papers and copying notes in the exam hall were among the most common issues this year.

At each exam centre for the Leaving Cert, notices are placed in prominent locations warning students of the penalties for cheating.

Students are warned they are liable to have their whole examination cancelled if they bring in iPods, MP3/4 Players or mobile phones into the exam hall.

Candidates also face having their exam cancelled if they attempt to communicate with other students in the exam centre during the exam or by electronic means with people outside the centre.

The results of the 80 students are being provisionally withheld on a without prejudice basis, pending further communication with the schools and candidates concerned, an SEC spokeswoman said.

Such rulings are open to appeal.

The SEC spokeswoman said: “In the interest of being fair to all candidates, the SEC must be satisfied that marks awarded have been gained fairly and will investigate any suggestion, suspicion or allegation of cheating or other impropriety in relation to the examinations.

“This is essential in order to uphold the integrity of the Irish State examinations system and to underpin equity and fairness within the system in order to enable all candidates to display their achievements on an equal footing.

“The SEC would strongly caution any student that might be tempted to cheat that serious consequences can result. They could lose marks or the full result in a subject; they could lose the results of the entire examination; or they could be debarred from entering for any of the State examinations for a specified period.”

Results have been withheld from 80 students this year compared to 72 at this point last year.

Last year 38 students were told their results would be permanently withheld at this stage and another 34 students had their results provisionally held back. After the 34 provisionally held back results were investigated, the SEC spokeswoman said the final number of students for whom results were permanently withheld at the end of 2017 was 57. This compared to 100 for 2016 and 101 in 2015.

Those suspected of cheating in the Leaving Cert this year represent a tiny proportion of the 57,000 students to sit the exam.

Figures previously released by the SEC show teenage boys were twice as likely to cheat in the Leaving Cert as teenage girls.

According to the SEC, cases of suspected cheating can come to light in a number of ways including an examiner detecting similar work from more than one candidate when correcting papers from the same centre, or an examiner may discover notes or paper brought in by a candidate in an attempt to gain an advantage in the examination.

Cheating can also be detected when an examination superintendent sees a candidate using prohibited items such as books, mobile phones or attempting to contact another candidate in the centre.