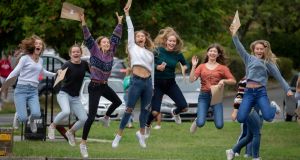 Minister for Education Richard Bruton has said officials will examine whether there are “lessons to be learned” from the volume of students who failed ordinary level maths in this year’s Leaving Cert exam.

However, he played down concerns over the issue and said the proportion of failures at ordinary level was linked to greater numbers taking on the higher level paper.

“We have successfully taken the proportion doing higher level maths from around 20 per cent to over 30 per cent , and that has changed the shape of those doing ordinary and foundation level.

“A consequence of this is you do see a higher proportion of weaker grades than you used to,” he said.

More than 3,700 students failed their maths exams, effectively locking them out of many third-level courses which require a pass as a basic entry requirement.

The bulk of these fail grades were at ordinary level (just over 3,000 students, or almost 10 per cent).

By contrast, the failure rate at higher level was far lower (just over 300 students or almost 2 per cent).

Mr Bruton said the chief examiner at the State Examinations Commission will examine whether there are issues to be addressed.

He said there was a wider challenge to ensure curriculum reform from primary right through to secondary gives students a better foundation to deal with “computational thinking” and problem-solving.

“We’re reforming maths at primary level; we’re reforming the Junior Cycle maths exam. They will lay a strong foundation as we do want to see a wider range of people with an appreciation of Stem- (science, engineering, technology and maths) related subjects.”

‘Not fit for purpose’

Employers’ group Ibec has warned, meanwhile, that the Leaving Certificate is “not fit for purpose” and reform is needed to help students prepare for their future.

Claire McGee, Ibec’s senior executive for innovation and education policy, said: “In its current form it is doubtful that the Leaving Cert is in tune with the needs of Irish society and its economy.

In response, Mr Bruton said the senior cycle was being reviewed to ensure it equips young people with proper skills.

“You don’t have to be Ibec to see that the world of work is changing and the sort of emphasis is on team-working, problem-solving and creative thinking. We have to make sure the curriculum we set reflects those needs. The issue of assessment follows on from that.”

“. . . We have to make sure that as we evolve our curriculum content that we evolve the assessment methods. It’s good to see Ibec contributing to a debate which we need to have with senior cycle.”

Meanwhile, Aontas, the national adult learning organisation, has paid tribute to mature students who received their results on Wednesday.

“The Leaving Cert can act as a vital stepping stone for early school leavers to achieve their educational goals but it is just one of many options available to adults,” she said.

Ms O’Reilly said there were a variety of other options for students to receive the Leaving Cert standards, which is equivalent of a level four or five course on the national framework of qualifications.