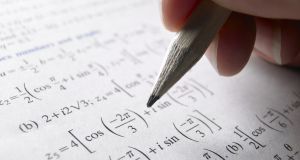 While the maths failure rate at ordinary level is a source of concern, policymakers will be pleased at the record high in numbers opting for higher-level maths.

More than 3,700 students have failed their Leaving Cert maths papers, effectively locking them out of many third-level courses which require a pass as a basic entry requirement.

The bulk of those who failed to secure a pass grade sat the ordinary-level paper where the failure rate was just under 10 per cent.

The proportion who failed the higher-level paper, by contrast, was just under 2 per cent.

While many ordinary-level students might have performed better in foundation-level maths, teachers say some schools have ceased to offer this subject due to resource constraints and a growth in numbers taking higher-level exams.

The proportion of Leaving Cert students taking higher-level subjects, meanwhile, has climbed to a new high due to last year’s overhaul of the grading system.

These changes involve the awarding of Central Applications Office (CAO) points for what used to be termed an E grade (30 to 39 per cent). This has reduced the fear of failure on the part of many who might previously have sat the ordinary-level paper.

The gamble of taking on the higher-level paper has paid off for most students with a large majority securing honours grades and remarkably low failure rates.

Overall, some 57,000 students are set to receive their results on Wednesday. Students can collect their results from their schools from 9am or online by visiting the State Examinations Commission websitefrom midday.

Those who applied for college will not know whether they have secured their first-choice places until next Monday when offers through the CAO are made.

A small number of students have achieved stellar results, with seven students securing top grades ( H1s or 90-100 per cent) across eight subjects.

A further 53 students secured H1s in seven subjects, while 189 achieved H1s in six subjects. These numbers are broadly similar to last year.

Students who may be disappointed with their results have been urged not to panic and to take time to consider options available to them.

Minister for Education Richard Bruton, who congratulated students on their results, said there were plenty of opportunities for all students regardless of how they performed.

“Students receiving your results today, I want you to know that there are more opportunities now than ever before, to help you achieve your ambitions in life,” he said. “There are a number of pathways to further your education, whether you choose third level, a post-Leaving Cert course, or the apprenticeship and traineeship routes.”

While the maths failure rate at ordinary level is a source of concern, policymakers will be pleased at the record high in the numbers opting for higher-level maths

It is the first year for politics and society. More than 800 students sat the exam across more than 40 schools.

While the maths failure rate at ordinary level is a source of concern, policymakers will be pleased at the record high in the numbers opting for higher-level maths. The Government is keen to plug skills gaps in so-called Stem subjects and wants to increase the pipeline of potential graduates.

Almost a third of students sat the higher paper this year, a near-doubling of the numbers since 25 bonus points were introduced for those who score more than 40 per cent.

More than 90 per cent of those who sat higher maths were eligible for bonus points.

However, academics in higher education have expressed concern over the basic skills of Leaving Cert maths students who are passing the higher-level paper but struggling to cope at third level. Some argue it is time to re-examine the policy of awarding bonus points for the higher-level paper given the volume of difficulties facing students completing maths-intensive courses.

* The Irish Times help desk will operate at irishtimes.com/results2018 on weekdays from 9am over the period from the release of the Leaving Cert results until after the CAO offers are released on August 20th.