Why did Drumm get six years and how does it compare with others?

Former chief’s jail term reflects lead role at Anglo but others are serving longer in UK, US 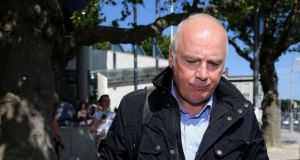 The six-year jail term handed to former Anglo Irish Bank chief David Drumm is much longer than two former colleagues received over the same transactions but reflects his more senior role in the €7 billion fraud.

Judge Karen O’Connor described the 51-year-old former banker as the “driving force” in Anglo and the person behind the funding initiatives that led to the dishonest and fraudulent scheme that falsely inflated Anglo’s deposits to hide the fact the State’s third-largest bank bled cash during the escalating banking crisis.

Drumm’s position as the highest-ranking executive at Anglo weighed heavily in the judge’s ruling.

He was chief executive and a board member, she said, and therefore in “a position of trust” for the bank, its depositors and potential depositors, investors and lenders. He authorised the transactions, was “at the helm of the bank” and “clearly extremely hands-on”, chairing funding meetings in his office every Friday.

Weighing how much time he should spend behind bars, the judge looked at the sentences given to Drumm’s three co-conspirators: his second-in-command, finance director Willie McAteer and the bank’s de facto head of treasury John Bowe, who were jailed for three and a half years and two years respectively. She also considered the sentence of two years and nine months handed to Denis Casey, the Irish Life & Permanent chief executive, whom the judge was told yesterday approved the scheme directly with Drumm.

McAteer and Bowe were “subordinates” to Drumm within the company’s structure, she said. “Mr Drumm held a more senior position and was a more influential figure – he had a leadership role,” said the judge.

Drumm’s sentence is the same as the initial 2012 jail term handed to Paul Begley, of the Blanchardstown company Begley Brothers in Dublin who ran a €1.6 million fraud for importing thousands of tonnes of garlic at a lower rate by having them labelled as apples. His sentence was, however, reduced to two years in 2013.

The Anglo jail terms, while lengthy, are in line with similar sentences given for other serious offences that took place overseas during the financial crisis.

In the UK, bankers have received sentences ranging from two years and nine months to 11 years in the scandal over the rigging of Libor, the London inter-bank lending rate, a key benchmark that sets interest rates in finance and underpins trillions of pounds worth of loans and contracts.

Tom Hayes, a former derivatives trade at UBS and Citigroup in Tokyo, was convicted of eight counts of conspiracy to defraud in 2015.

He was the first person to be found guilty by a jury over the Libor scandal and is serving the 11-year sentence, the longest handed down over the scandal that led to fines of $9 billion (€7.7 billion) against some of the world’s largest banks.

Three former Barclays executives involved in the rate-rigging were, like Drumm, Bowe, McAteer and Casey, convicted of conspiracy to defraud and received sentences ranging from two years and nine months to five and a half years on appeal.

There have been few prosecutions of bankers in the US over the 2008-09 financial crisis. Sentencing guidelines for a federal offence involving a €7 billion fraud would range from about 15 to 20 years. A judge could, however, go lower if they had reasons to depart from the guidelines or vary the sentence.

At home, Drumm’s sentence is eclipsed by the 16-year jail term handed down to former solicitor Thomas Byrne in another fraud case. He was sentenced to consecutive terms of nine and seven years with four of the full 16-year term suspended in 2013.

Byrne’s case is different: he was convicted of stealing €52 million from the banks and defrauding 13 clients out of their houses or money.

The judge said Drumm’s fraudulent conspiracy could have potentially caused significant loss but it appears that “no actual money was lost” and neither Drumm or his three co-conspirators made any personal financial gain as a result of the offences.