Tusla told to address shortcomings after false claim against McCabe 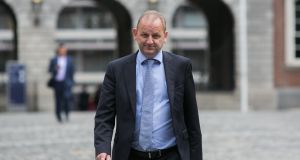 The health watchdog has urged Tusla, the child and family agency, to take urgent action to address serious shortcomings in how it manages allegations of child sexual abuse.

Systems failures identified within the State’s child protection agency pose a risk to vulnerable children, the Health Information and Quality Authority (Hiqa) found after a year-long investigation into the mishandling of a false allegation against Garda whistleblower Sergeant Maurice McCabe.

The watchdog found inadequate managerial oversight, a gap between Tusla’s national policies and what is happening on the ground, poor performance not being detected or corrected, a lack of timeliness in responding to referrals and poor record-keeping.

Investigators said Tusla’s standardised processes and policies were neither fully understood or implemented, and not adhered to, and criminal investigations were cited as a reason for delaying the start and completion of assessments.

There was “insufficient oversight at all levels to assure the Tusla executive and board,” Hiqa said.

Mary Dunnion, director of regulation at Hiqa, said the watchdog’s investigation supported concerns expressed by Minister for Children Katherine Zappone last year that Tusla’s poor handling of information in the McCabe case posed a possible risk to the health and welfare of children.

The Minister ordered Hiqa to carry out a statutory investigation into Tusla in March 2017 but directed it not to stray into areas of overlap with the Disclosures Tribunal investigating an alleged smear campaign against Sgt McCabe.

Hiqa’s investigation found that not all children at potential risk were being assessed and, where necessary, protected by Tusla in a timely and effective manner because of inconsistencies discovered in the practice of screening allegations of child sex abuse and making preliminary enquiries around them.

Inconsistencies were found in safety planning by Tusla which meant that while some children were adequately safeguarded, others at potential risk were not, Hiqa concluded in a 308-page report.

Even for vulnerable children where there was a safety plan in place, the authority found that these plans “were not always reviewed to ensure the continued safety and wellbeing of the child,” the report said.

In response to whether there needed to be a management change at Tusla, Ms Dunnion told a press conference that it was a matter for the Department of Health on whether the board and executive of Tusla are meeting their responsibilities and the report defines accountability on whether its recommendations are implemented.

Tusla was found by the health watchdog not to have a standardised approach to direct and guide staff in the management of retrospective allegations, leading to variation in practices and delays.

The investigation concluded that Tusla had no comprehensive strategy for its staff, had inadequate training, failed to promote a culture of learning and showed little evidence of developing staff skills.

Ms Dunnion said Tusla, which employs 4,100 staff, cannot rely on recurring staff shortages as a default reason for failing to deliver a more efficient and safer service to children.

The report found that Tusla managed to recruit only 12 full-time social workers nationally between November 2016 and November 2017, despite intensive efforts to beef up the agency nationally.

Hiqa identified specific deficiencies in relation to working arrangements between Tusla and the Garda, finding that there was no agreed information-sharing protocol between them to facilitate the good sharing of relevant information and there was no electronic data transfer system between them.

The watchdog has said that the Department of Children and Youth Affairs must set up an expert quality assurance and oversight group to support and advise on implementing its recommendations, including an action plan to be published by Tusla with clear timelines on making changes to the organisation.