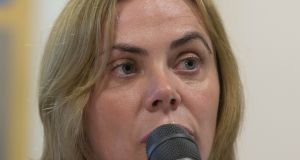 About one in seven open cases concerning child sexual abuse allegations against an adult in 2017 were still awaiting an initial assessment by Tusla, the State’s child protection agency, an investigation has found.

Some 165 - or 15 per cent - of 1,083 open child sexual abuse referrals against an adult that required an initial assessment, as of May 1st, 2017, still awaited that assessment to be carried out, Tusla reported.

This figure is contained in a report by the State health watchdog into the mishandling of a false allegation against Garda whistleblower Sgt Maurice McCabe.

Health Information and Quality Authority investigators found that, among the cases it reviewed, an initial assessment was required in 125 referrals of child sexual abuse and of those, 75, or 59 per cent, had commenced while the remainder were awaiting assessment.

The Hiqa team that examined Tusla’s systems and cases over a year-long investigation reviewed a sample of 164 cases reported as closed in six service areas visited by investigators. It found evidence of poor record-keeping to the point that it could not be established if some of the cases were actually closed.

“Furthermore, the investigative team found cases which were inappropriately closed as there were outstanding child protection concerns,” said the authority in the report.

“These cases were escalated to the relevant area managers and reopened. It is incumbent on Tusla to ensure that no case is closed where child protection risks remain unassessed.”

Eva Boyle, an inspector manager in Hiqa’s children’s team, told a press conference that investigators raised concerns about 10 cases within the sample of 164 closed cases to Tusla’s management for reopening.

“We would have highlighted or queried in relation to other individual cases when we were actually out in the sites that we visited,” she said.

Hiqa escalated 65 cases to regional managers at Tusla where it was concerned about a potential risk to a child that led to the agency putting in a plan of action, such as carrying out a home visit to meet parents.

“We were given assurances that Tusla were satisfied that they putting appropriate plans in place to safeguard those children,” Ms Boyle said.

Investigators found Tusla were failing to protect three children who were already on the agency’s child protection notification system and assessed by the agency as being at an ongoing significant risk.

Once highlighted by Hiqa investigators, Tusla considered different actions to protect the children to safeguard them, she added.