Ex-British soldier to be prosecuted for Aidan McAnespie killing 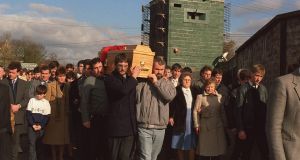 A file image showing the coffin of Aidan McAnespie being carried through the British army checkpoint where he was shot dead. Photograph: Pacemaker 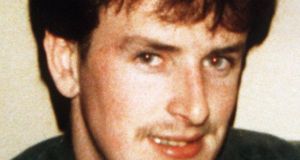 Aidan McAnespie (23) was shot dead in 1988 as he walked through a British army checkpoint on his way to play a football match. Photograph: Pacemaker

A former British army soldier is to be prosecuted for the February 1988 killing of Co Tyrone man Aidan McAnespie.

Northern Ireland’s Public Prosection Service (PPS) confirmed on Tuesday a 48-year-old man will be prosecuted for the offence of gross negligence manslaughter in connection with the fatal shooting of the 23-year-old 30 years ago.

Mr McAnespie was shot dead on the Tyrone-Monaghan border area as he walked through a British army checkpoint on his way to Aghaloo GAA grounds to watch a football match.

The suspect in the killing, who previously said he accidentally fired his machine gun because his fingers were wet, had been charged with manslaughter in 1988, when he was aged 18, but the proceedings were withdrawn at Belfast Magistrates Court in September of that year.

A Historical Enquries Team (HET) report into the killing was published in 2008 but the matter was not referred to the PPS at that point.

The family engaged with the North’s Attorney General John Larkin to seek an inquest and the case was referred back to former PPS director Barra McGrory.

A review was conducted and the PPS decision on Tuesday was that the test for prosecution has been met.

In reaching this decision, the PPS considered evidence from the time and also fresh evidence in the form of a firearm report from two experts.

The case was not one where self-defence was at play watch so a murder charge was considered but it was decided the evidence did not meet the requirement for this.

Gross negligence manslaughter comes with a discretionary life sentence so there is no limit on the term that could be imposed if the accused is found guilty.

The former solider has been emailed to advise him of the PPS decision.

Papers will be served on the man’s lawyer in the next four to six weeks and his first court appearance is likely to be in two to three months time.

“The family is happy that a charge is going to be brought against [THE SOLDIER],” he said.

“There is light at the end of the tunnel and we will get the story of Aidan’s case and what really happened 30 years ago.”

He spoke of the toll the campaign for justice had taken on his family and of their determination to see the legal process out.

“My sister Eilis fought a campaign for 20 years and it wore her down and passed her out,” he said.

“It is tiresome on the family to keep fighting and keep going but at the end of the day we have to try to get the truth for Aidan.

“After all on the day of funeral Cardinal Tomás Ó Fiaich said it was murder so the family has to prove a point and we would like to continue on that battle for Aidan, for my sister Eilis and for my mother who passed away as well.”

“The reality is we always knew he should face justice and now he will.”

On the wider debate about the idea of a statute of limitations for soldiers which is favoured by some, Mr Mackin described this as “criminally flawed and morally bankrupt”.

“Nobody can ever be above the law,” he said.