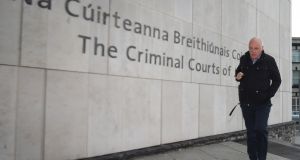 David Drumm, arriving at the Criminal Courts of Justice in Dublin on Wednesday for his sentencing hearing. Photograph: Collins Courts

The anticipation built in Court 19 at the Criminal Courts of Justice as the time when Judge Karen O’Connor would sentence former Anglo Irish Bank chief David Drumm came and went three times.

It took years to bring the Dubliner to justice for a fraudulent and dishonest scheme perpetrated during the 2008 crisis, so perhaps it was fitting that he should endure an excruciating wait to learn his sentence.

When she eventually arrived shortly after 4pm, the judge stressed the Dublin Circuit Criminal Court was not sentencing Drumm for causing the banking crisis or economic crash; his offending did not cause Anglo’s collapse.

He was being sentenced for two specific offences, she said: conspiracy to defraud and false accounting.

The billion euro merry-go-round of deposits between Anglo and Irish Life and Permanent at the height of the 2008 banking crisis, clocking up to a fake €7.2 billion as the billion “passed Go” each time, was “a dishonest and fraudulent scheme”, the judge said. The “circulating or rotating amounts” – as she described them – made Anglo look healthier and stronger than it was when everyone (correctly) suspected otherwise.

That was the conspiracy to defraud; the false accounting of those transactions came a little over two months later when Drumm represented them dishonestly to the market and the public in Anglo’s financial statements.

“This was false and Mr Drumm knew that it was false,” she said.

Drumm’s actions amounted to “grossly reprehensible behaviour” and that his stated motivation to keep the bank open – as well as the inaction, weakness and ineptitude of the Financial Regulator that his defence team had pointed to – were no excuses, she said.

The judge acknowledged that Drumm and his colleagues were working in an extremely difficult economic climate but that this was no excuse either.

Drumm showed no emotion as the judge read from her eight-page ruling.

His poker face has, at this point, been well perfected through two long-running court cases in Boston and his 87-day criminal trial in Dublin, one of the longest in the history of the State.

Head tilted back, the 51-year-old man from Skerries, north Co Dublin listened intently from the dock, dressed as he has been for this five-month trial, in his navy blue suit and open-necked light blue shirt.

Despite lengthy submissions from the prosecution and defence – and the stop-start delays in the sentence – the courtroom remained packed throughout with standing room only.

It might have been almost a decade since the bank collapsed but the Irish public is still paying the €29 billion tab from its failure and the sentencing of its leading executive was always going to be big box office.

Drumm is the most senior Anglo executive to be convicted arising out of the fraudulent attempts to save the bank and his is the longest sentence handed down by any judge in the long-running Anglo trials.

The judge zoned in on his unique role – as chief executive and a board member he had a position of trust and the public is entitled to trust information published by a public limited company and to make decisions based on that information.

Earlier, Drumm’s counsel Brendan Grehan tried to deal some mitigation cards, suggesting in questioning to Det Sergeant Michael McKenna, one of 16 detectives involved in the investigation into the transactions, that the court had never really got to the bottom of who came up with the idea for the scheme.

“We got to the bottom of it now,” replied McKenna, to laughs around the courtroom.

Almost a decade on from the crisis, some may feel that, yes, we have got to the bottom of this mess; others will be far from happy that the “driving force” behind Anglo will only serve six years (reduced by five months for the time he served in jail in the US awaiting extradition).

Still, for Drumm, it was a remarkable rise to Ireland’s corporate heights and a stunning fall to earth, the six-year sentence being a heavy thud for a former high-flying banker.

On Wednesday, the son of a truck driver and hairdresser who hit the big time at the age of 37, becoming chief executive of a lender once trumpeted as the world’s best bank, left in the back of a prison van for Mountjoy.