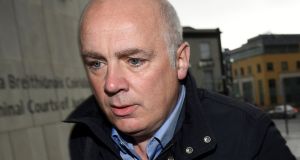 David Drumm will be regarded as being of no security risk as a prisoner and will likely earn the right to be transferred to an open prison. Photograph: Reuters/Clodagh Kilcoyne

Prisoner number 102640, David Drumm, will serve just over 3½ years before being due for release.

Prisoners like Drumm – who are educated and who do not live in a spiral of offending linked to substance abuse – are unusual in the Irish prison system. And because of that, he is likely to enjoy the easiest regime and the shortest sentence that is possible under the Irish system.

“These guys, the white collar criminals with no previous jail time, generally go in and they’re very quiet and never cause any trouble at all,” said one source.

Another source with decades of experience working in jails said: “The prison system is set up to be kindest to the prisoners who cause the least trouble and can be trusted.

“And guys like David Drumm won’t give you even a few minutes of trouble in the years they are locked up. But it’s still jail; it smells like jail, it sounds like jail. You’re surrounded by criminals and it’s stressful; very, very stressful.”

Drumm was sentenced to six years but like all prisoners he gets 25 per cent remission, or time off. That means an actual sentence of 4½ years.

But he will almost certainly earn enhanced remission. This, in addition to time off earned for good behaviour, brings the total remission to one third of his sentence. That would mean jail time of four years for Drumm.

He also receives credit for the five months he spent in custody in the US. That leaves him with three years and seven months to serve.

When he secures temporary release to spend Christmas 2021 with his family, he will be told he can serve out the five or six weeks that remain on his sentence in the community on “temporary release”; early release in all but name.

If he is compelled to return to prison after that period of temporary release during Christmas week 2021, he will be free by Valentine’s Day 2022.

Drumm was committed to the prison system via Mountjoy Prison, Dublin, on Wednesday evening. Informed sources said he would remain in Mountjoy for at least one night before a decision was taken about where he would spend the first section of his sentence.

At present overcrowding in Mountjoy is not an issue and there is nothing to stop prison management keeping him there. He would be out of step with the prison population in Mountjoy given the high rates of substance abuse and levels of extreme social disadvantage.

“He is the type who is much more likely to get stuck into the educational facilities than most of the others,” said one informed source.

“He’ll be sent somewhere to match those characteristics and that almost certainly means Wheatfield.”

Arriving at Mountjoy he went through the same ritual as all other prisoners sentenced by the courts. His photographs, fingerprints and measurements were taken and any marks on his body were noted.

In his committal interview, he would have given details about himself, including any addictions or medical needs. He would also supply details of people he wants permission to phone from prison or whom he wants to visit him.

After being officially committed into the prison system in the “reception area”, all prisoners are then transferred to the basement area of Mountjoy, known as the B Base, where they spend their first 24 hours in custody.

Inmates are monitored closely because in the first hours after committal, especially for a long sentence, prisoners are regarded as being at highest risk of self-harm or suicide. All prisoners meet the governor while in the B Base, as well as medics.

All of the cells in B Base have in-cell sanitation as well as a TV and kettle. His cell and all others were due to be unlocked on Thursday morning just after 8am. Drumm was due to join other prisoners in collecting his breakfast and bringing it back to his cell, where he was due to be locked in alone while he eats.

After that, a decision was set to be made on where he goes to begin his sentence. Well placed sources said no decision had been made on Wednesday evening about where he would be sent but it would likely be Wheatfield.

The regimes in all prisons are broadly similar. After collecting breakfast, prisoners are locked in until 9.30am, when they are let out for recreation, work or education. They return to their cells at noon to eat and stay there until 2.15pm.

Because Drumm will be regarded as being of no security risk, he will earn the right to be transferred to an open prison very quickly.

However, the political sensitivities around his offending will ensure he will spend at least 18-24 months in a regular prison first. This will be followed by transfer to Shelton Abbey in Co Wicklow or Loughan House in Co Cavan where there are no security measures.

However, even before his transfer to an open prison he should also enjoy an enhanced regime in Wheatfield or one of the other regular prisons in the system.

Because he will be a quiet and predictable prisoner who poses no risk to himself or others he will probably quickly become a trustee prisoner.

This will involve being trusted with certain jobs, including working in the kitchens and being left to do tasks without close supervision by staff.

If he secures the status of trustee prisoner, he will also receive longer visits and phone calls and higher payments for the tuck shop. The incentives are offered to foster a calm prison regime with the least dissent and violence possible.