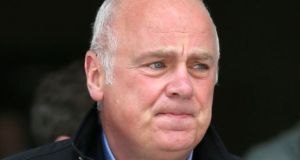 David Drumm has been jailed for six years for conspiracy to defraud. Photograph: Collins Courts

Introduction - Mr Drumm was convicted on the 6th June 2018 by unanimous verdict of the two offences charged on Bill of Indictment Number 289/16. Count 1 Conspiracy to defraud contrary to common law. Count 2 false accounting contrary to section 10 of the Criminal Justice (Theft and Fraud Offences) Act 2001. This trial has run for in excess of 80 days.

Mr Drumm was the Chief Executive Officer of Anglo Irish Bank Corporation plc and held this position from 1st January 2005 to 18th December 2008. He was a member of the board of the bank.

The bank was a public limited company, listed on the Irish Stock Exchange. At the relevant time its dates for accounting purposes were 31st March (mid year) and 30th September 2008 (end of year).

There can be no dispute that these were challenging and difficult times. There was dysfunction in the financial markets. The jury heard of the collapse of Northern Rock in September 2007, the collapse of Bear Sterns in March 2008 and Lehman Brothers collapsed September 2008. Many witnesses referred to the unprecedented nature of this global financial crisis. On 30th September 2008 the government issued a guarantee that all of the banking system liabilities would be met by the Irish government.

During the course of the trial, the jury was told on behalf of Mr Drumm that he accepted inter alia the factual matters regarding the mechanics of the September transactions, however he did not accept they were fraudulent or dishonest or that there was any dishonesty in their reporting. The jury rejected these submissions and convicted Mr Drumm unanimously.

He was the Chief Executive Officer at the time, a member of the board of and therefore in a position of trust in relation to the bank, its depositors, investors and lenders and also potential depositors, investors and lenders. In addition, the public are entitled to trust the information published by a public limited company and to make decisions based on that information.

The purpose of publishing accounts is to provide the market and the public, with information about the financial state of the company so that informed decisions can be made by interested parties about their financial affairs. In other words to enable people to assess whether they should leave money on deposit, move money, invest in the company in question or make any other relevant decisions.

In this case two “blue chip” publicly quoted companies conspired to manipulate the public accounts of Anglo Irish Bank. Mr Drumm along with others put together a dishonest scheme and engaged in transactions, designed to inflate deposits from a non-banking entity to Anglo Irish Bank on 30th September 2008 which was the reporting year end date for that bank. The intention was to create the false and misleading impression that Anglo Irish Bank was stronger or in a healthier position than it actually was as a result of 7.2 billion euro in corporate deposits i.e. deposits from a non-bank entity.

This figure was created by a series of transactions where money was rotated from Anglo Irish Bank to Irish Life and Permanent plc and through Irish Life Assurance, back into Anglo as a corporate deposit. This process was repeated a number of times. The strength of deposits from non-bank entities was regarded as an indication of the health of the bank and the evidence throughout the trial was that they were considered more stable and likely to remain in situ longer.

The transactions were without substance and provided no “real” financial liquidity or funding. There was evidence that they could have gone on ad infinitum save for time constraints. During the course of the trial the jury heard extensive evidence regarding the relationship between Anglo Irish Bank and Irish Life and Permanent plc. The jury heard evidence concerning balance sheet management, window-dressing and the role of Ernst and Young and PWC. Much time was spent on the function and knowledge of the Audit Committee.

The false accounting offence flowed from the first offence, it was the publication of information into the market about the performance of the bank creating the impression that Anglo Irish Bank had stronger corporate deposits. The 7.2 billion euro figure arose as a result of circulating or rotating amounts of money in the manner referred to earlier.

The preliminary account published in December 2008 gave the market the impression that the non-bank deposits into Anglo Irish Bank were greater by 7.2 billion euro than they actually were, this was false and Mr Drumm knew that it was false.

The fact that the scheme ultimately did not succeed is irrelevant. Mr Drumm was part of a conspiracy which potentially could have caused significant loss. It appears that no actual money was lost. From the evidence it is clear he was the driving force in Anglo Irish Bank and the person behind the funding initiatives being considered by the bank. He authorised the transactions, was at the helm of the bank, and clearly extremely “hands-on” in his position in the bank. Evidence throughout the trial was in respect of weekly Friday meetings chaired by Mr Drumm where a number of initiatives were discussed, but fell away. It had become increasingly difficult to source money i.e. liquidity. This lead to an increase in the level of the transactions regarding the remaining initiative which was with Irish Life and Permanent plc. Despite the failure of the scheme these were very serious offences.

The nature of the offending is aggravating in circumstances where this was a dishonest and fraudulent scheme involving a conspiracy to the tune of 7.2 billion euro.

This offending was premeditated and planned, and in fact the evidence was that significant planning went into this fraud.

Mr Drumm is a person of previous good character, he has no previous convictions. He has a supportive family.

He has lost his reputation which will encroach on any future employment opportunity. This is difficult for him on a personal level in circumstances where he was respected within the banking industry.

He has been the subject of much opprobrium which no doubt has been difficult for Mr Drumm and his family on a human level.

The most significant form of mitigation in a case of this nature would be as a result of a guilty plea. Fraud cases by their nature demand considerable state resources, time-consuming investigative work and court resources. Mr Drumm was perfectly entitled to fight this case, he has a constitutional entitlement to a trial. He cannot be prejudiced in any way by proceeding to trial. However, the mitigation which would have been available had guilty pleas been entered would have been considerable and that mitigation is not available. While certain matters were admitted to by Mr Drumm, he did not accept that the transactions were fraudulent or dishonest or that there was any dishonesty in their reporting.

Reference was made earlier to the financial crisis at the time and clearly Mr Drumm and his colleagues were working in difficult circumstances to protect the interest of Anglo Irish Bank. The bank was haemorrhaging money at the time. Funding initiatives had disappeared. However the motivation to keep the bank open is irrelevant. This was grossly reprehensible behaviour and it does not provide any excuse for fraud and dishonesty.

Similarly inaction, weakness and ineptitude on the part of the Financial regulatory authorities provides no excuse for a scheme of this nature. The jury were told that this was part of a “green jersey agenda” wherein Irish banks would help each other. Mutual assistance is a far cry from unlawful acts. There was no evidence in this case that the Central Bank or the Financial Regulator directed criminality. The public has to be able to trust its banks, citizens place their trust in a bank, allow banks to manage their money and need to be able to believe and make decisions on foot of the information published by their banks.

In the case of People (DPP) v. Maguire [2015]IECA 350, the Court of Appeal Mr Justice Birmingham stated “The banking sector is one where society is entitled to expect probity and entitled to demand high standards.” He referred to an additional dimension of seriousness being provided when an offence is committed in a publicly quoted company and in a major bank. “In a situation where the case has been fully contested it is understandable that the judge felt that he had to consider a custodial sentence.” It does not mean that a convicted person is punished for not pleading guilty, it means that mitigation which would have been available is forfeited.

In a previous trial involving the co-conspirators, in the case of the People (DPP) v. Bowe, McAteer and Casey the presiding judge in the Circuit Court imposed sentence on the 29th July 2016 after a lengthy trial. Mr McAteer had been the Finance Director of Anglo Irish Bank at the relevant time and a board member, he received a sentence of three and a half years imprisonment. Mr Bowe was sentenced to two years imprisonment and Mr Casey who had been Chief Executive Officer of the Irish Life and Permanent plc, was sentenced to a term of imprisonment of two years and nine months.

Mr McAteer and Mr Bowe were subordinates to Mr Drumm within the company structure in Anglo Irish Bank. Mr Drumm held a more senior position and was a more influential figure. He had a leadership role.

While he and his colleagues were working in an extremely difficult economic climate, this does not provide an excuse for the offending. Nor does the motivation or desire to keep the bank open. There has been no suggestion that Mr Drumm or the other conspirators made any personal financial gain as a result of tis offending.

This Court has considered all of the evidence from the sentence hearing which took place earlier today. I have listened carefully to the plea in mitigation made on behalf of Mr Drumm and I have considered his personal circumstances. It is my duty to assess the gravity of the offending, the aggravating factors and the moral culpability of the individual offender.

Sentence is to be imposed in relation to the two counts, and this Court is satisfied that in circumstances where Count number 2, the offence of false accounting contrary to section 10 of the Criminal Justice (Theft and Fraud Offences) Act, 2001 has provision for a maximum penalty of ten years imprisonment, I will treat ten years as the maximum in relation to Count number 1.