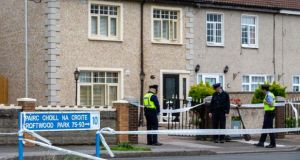 Gardaí at the scene where a man was shot dead in Croftwood Park, Ballyfermot, Dublin. Photograph: Tom Honan

Two men have been arrested in connection with the fatal shooting in July of a man (55) at a house in Ballyfermot, Dublin.

The victim was killed after opening the front door of a house at Croftwood Park at about 11am on July 27th.

He had been living in the UK and had arrived home to Ireland about a week previously. He was staying in the home of his elderly mother when he was killed.

The victim was not known to gardaí and is not thought to have been involved in gangland crime either here or in the UK. However, at least one person close to him is believed to be involved with a local criminal gang whose leader has been a target of the Criminal Assets Bureau in recent years.

Two men were arrested on Friday morning over the shooting. The men, aged in their early 30s and mid-20s, are detained at Lucan and Clondalkin Garda stations.

Gardaí­ continue to appeal to anyone with information on the shooting to contact Ballyfermot Garda Station on 01 666 7200, the Garda Confidential Line 1800 666 111, or any Garda Station.