‘ It’s a guilt to have survived’, says Garda who was with Adrian Donohoe when he was murdered 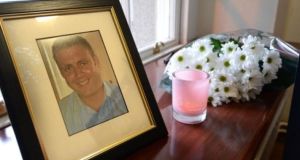 The garda who was with Adrian Donohoe the night of his death in 2013 has said he still thinks of his former colleague every day and carries a “sense of guilt” that he survived theCo Louth shooting.

Mr Ryan, who is originally from Cork but spent most of his career stationed in Co Louth, suffered post traumatic stress disorder after the 2013 killing and now lives in Spain.

In his first interview since his colleagues’ deaths, Mr Ryan told RTÉ’S Prime Time programme he felt “guilty” he was sitting in the driver’s seat the night in Lordship.

“Adrian was a family man, I don’t have any kids. It’s a guilt to have survived.”

He recalled the final night of Mr Donohoe’s life when the two Garda detectives were on cash escort duties on the Cooley Peninsula, transporting money from four credit unions to a nightsafe in Dundalk.

The gardaí were outside the credit union at Lordship when four men appeared – two were armed and ran towards the Garda car.

“The first thing I heard was banging off to my right-hand side and shouting, and then two people running towards the Garda car, and then the shotgun being discharged over the roof of the car which hit Adrian and killed him outright,” said Mr Ryan.

“It felt like ten minutes, but as we know from recordings, it was 58 seconds, 59 seconds, but to me it felt like ten minutes. When you’re aware of a firearm that has been discharged is pointing at your head and your general torso it is a frightening experience. What was going through my mind at the time was that I hope I get shot by the nine mil because if it was the shotgun, it would have been fatal. You’ve some chance to survive a nine mil.”

He recognised the accents of men shouting as coming from the local Border area. Mr Ryan discovered his colleague was dead after the men fled the scene in a stolen volkswagen Passat that had been blocking the exit. He attempted to give Donohoe first aid, but it was too late.

On Wednesday, Aaron Brady (29) was sentenced to life imprisonment following a conviction in August of capital murder for shooting Mr Donohoe dead on January 25th 2013. The Criminal Justice Act 1990 states the minimum time that Brady will serve in prison for capital murder is 40 years.

Mr Justice Michael White also sentenced Brady to 14 years for the robbery, a sentence that will run concurrently with the life sentence. The raiders stole just €7,000 during the robbery, which lasted 58 seconds.

Mr Daly, who retired from the force ten years early, made a victim impact statement that was read out at Wednesday’s sentencing.

Speaking at the sentence hearing for her husband’s murderer this week, Caroline Donohoe’s said that in 58 seconds her family’s life had changed forever. “We had a happy family, everything was perfect,” she said.”Nothing or no one will ever replace Adrian in our home.”