Four men , including two from Northern Ireland, on trial in connection with deaths of 39 people 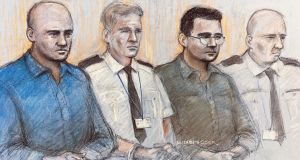 Court artist sketch of Gheorghe Nica (left) and Eamonn Harrison (right) two of four men to face trial, at the Old Bailey in London, for being part of an alleged people-smuggling ring linked to the death of 39 migrants in a lorry in Essex. Sketch: Elizabeth Cook/PA Wire

Some of the 39 people found dead in a lorry container in Essex were involved in an earlier foiled people-smuggling attempt, a court has heard.

The Vietnamese men, woman and children, aged between 15 and 44, suffocated as they were transported from Zeebrugge in Belgium to Purfleet in England on October 23 last year.

Jurors have heard how the victims had been sealed in the pitch black unit in temperatures of 38.5 degrees for 12 hours.

Four alleged people-smugglers, including two men from Northern Ireland, are on trial at the Old Bailey in London.

Alleged key player Gheorghe Nica (43) of Basildon, Essex, and lorry driver Eamonn Harrison (23)of Mayobridge, Co Down, who allegedly transported the migrants to the ferry at Zeebrugge, deny 39 counts of manslaughter.

They are accused with another lorry driver Christopher Kennedy (24) of Co Armagh and Valentin Calota (37) of Birmingham, of being part of a wider people-smuggling operation, whichMr Nica has admitted.

On October 11th the occupants of a farm near Purfleet allegedly witnessed 15 to 20 people get out of a lorry trailer and run towards a fleet of dark cars which then drove off at speed.

On that occasion, the trailer was dropped off by Mr Harrison at Zeebrugge and collected by Mr Kennedy at Purfleet who was then met by Mr Nica and others at the nearby pick-up point, it was claimed.

Mr Kennedy was stopped at Coquelles in France en route to Folkestone via the Eurotunnel, the court heard.

His lorry was searched and 20 Vietnamese people were discovered in the back, Mr Emlyn Jones said.

The migrants were taken away by authorities but Mr Kennedy was allowed to continue on his way to Kent, the court heard.

Mr Emlyn Jones told jurors: “At least two of the Vietnamese nationals turfed out of the lorry that night ended up in Harrison’s lorry on October 22nd, and were amongst the victims who died that night.

“So you may think that this provides a powerful link between the activities of October 14, and the fatal episode on the 22nd/23rd.”

“These particular victims had secured the services of the organised criminal network to get them to the UK.

“Obviously, they need a plan B, they try again.

“So the organisers have to arrange a replacement journey — which again involves the same teams of drivers, lorries, and so on.”

The court has previously heard that four other defendants have already admitted their part in the people-smuggling plot.

Among them are lorry driver Maurice Robinson (26) of Craigavon in Northern Ireland, who found the 39 migrants dead in the container after picking it up in Purfleet, and haulier boss Ronan Hughes (41)of Co Armagh who have admitted manslaughter.

Jurors heard how, on October 18th, Mr Harrison took a mixed load of migrants and biscuits to Zeebrugge which was picked up by Kennedy when it reached Purfleet on the ferry.

The human cargo was allegedly dropped off at the same location as before where Mr Hughes, Mr Nica and Mr Calota were caught on CCTV footage waiting.

The night before, Mr Kennedy had been in touch with Mr Hughes on burner phones, Mr Emlyn Jones said: “Dirty phones for dirty business.”

On inspection, Ms Richmond-Clarke noticed that, although the top layer of Crimbles macaroons looked intact, underneath them were crushed boxes which had footprints and dirt on them, Mr Emlyn Jones said.

The consignment was rejected as there appeared to be human activity in the trailer with goods restacked despite the seal on the rear doors being unbroken.–PA