Reports of person being forced into car on motorway investigated 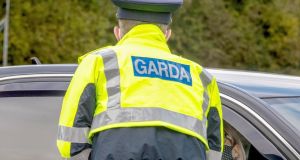 Gardaí have no reports of any missing person or unaccounted for at-risk person linked to the incident that at least one person believes they saw. Photograph: PA

Gardaí are investigating reports that a person was seen being bundled into a car on a motorway in the southeast on Wednesday.

Reports have been received by the gardaí suggesting the  incident was seen early on Wednesday evening, involving a person being bundled in the back of a car against their will.

Gardaí want driver of the car that was stopped on the Co Wexford motorway to contact them.

In an unusual investigation, gardaí have no reports of any missing person or unaccounted for at-risk person that could possibly be linked to the incident that at least one person passing the scene near Gorey, Co Wexford, believes they saw.

Garda Headquarters issued an appeal for information and other witnesses to come forward, though it has been tight-lipped on the nature of the incident.

However, The Irish Times understands the inquiry is into reports of a person being forced into a car on the M11 southbound and that the source of the information is regarded as highly credible.

Gardaí are keen to exhaust the investigation for fear somebody was being forced in the car against their will and the fact they are missing has not come to light yet.

The official Garda appeal said the incident under investigation is reported to have taken place on the lay-by of the M11, north of Junction 22 for Gorey north, on the southbound carriageway.

“A car with a male driver was observed parked in the lay-by at approximately 5.30pm. Gardaí are anxious to identify this vehicle and speak to the male present,” the appeal said of the incident on Wednesday.

The car that was stopped was described as a white saloon, possibly a Mercedes and now gardaí are appealing for anyone driving close to Junction 22 on the M11 between 4.45pm and 6.00pm to contact them.

The investigating team at Gorey Garda station is also seeking any dashcam footage that was recorded on the M11 southbound between 4pm and 6pm on Wednesday. And they are keen that anyone driving in the area who believes they may have seen the car, or any similar scene in the same area, to come forward.