Spotlight on lack of transparency on system of judicial appointments

Since 2014, all appointments to the Supreme Court, except that of Mr Justice Woulfe, were made directly from the Court of Appeal 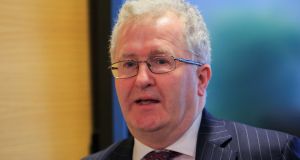 Séamus Woulfe seemed set to sit on the Supreme Court bench until a controversy erupted resulting from his attendance at the golf dinner at a hotel in Clifden. Photograph: Gareth Chaney Collins

There are no winners in the continuing controversy around Supreme Court judge Séamus Woulfe’s attendance at the Oireachtas Golf Society dinner. The judge, the Supreme Court and public confidence in the judiciary have all been adversely affected.

A spotlight has also been cast on the less than transparent system of judicial appointments, including how it allows for a potential conflict of interest when an outgoing attorney general seeks judicial office.

In July, Mr Justice Woulfe, the outgoing attorney general, was appointed to the Supreme Court. It is believed his was the only name recommended to the Government for appointment by the Judicial Appointments Advisory Board (JAAB). In late July, he received his seal of office from President Michael D Higgins and made the required declaration on oath in the Supreme Court before the Chief Justice, just before the courts rose for the summer vacation.

All seemed set for him to sit on the Supreme Court bench in the new law term this month until the controversy erupted resulting from his attendance at the golf dinner at a hotel in Clifden. A resolution of the matter has yet to be achieved after a planned meeting between the judge and the Chief Justice, Frank Clarke, was cancelled following receipt on Thursday of a “cogent” medical report to the effect the judge was not in a position to take part in the resolution process at this time.

The controversy has drawn attention to issues including the impact of the delayed commencement of judicial conduct provisions of the Judicial Council Act and the lack of transparency surrounding the system of judicial appointments.

There are two routes for appointment to the Supreme Court and the attorney general is involved in both. The first route, essentially an informal one, is that a judge in the lower courts notifies their interest in being appointed on a confidential basis to the attorney general and it is up to the latter to convey the names to the cabinet. A potential problem arises here if the attorney is also a contender for the position.

The second route involves the JAAB, comprising the five presidents of the courts, the attorney general, lay members appointed by the minister for justice and representatives of the Bar Council and Law Society. JAAB matters are confidential but the convention is, when an attorney general is seeking appointment, they will not be present when their application is being considered. It is believed that convention was adhered to in the case of Mr Justice Woulfe when his application was considered by the JAAB. It is unclear if any other names were considered but it is believed Mr Justice Woulfe’s was the only name forwarded by the JAAB to Cabinet to fill the vacancy created more than a year earlier by the retirement of Ms Justice Mary Finlay Geoghegan.

It is rare for judges of the Supreme Court to be appointed directly from the Bar or the solicitors profession. They are generally appointed as promotions from the High Court and Court of Appeal, reflecting the widespread view that serving as a judge in the lower courts is of considerable benefit and that direct appointments should be regarded as exceptional. A previous convention where, when a judicial vacancy arose, an outgoing attorney general had first refusal, appeared to disappear with the establishment of the JAAB in 1996. Since then, the only outgoing attorney general appointed to the bench, apart from Mr Justice Woulfe, was Máire Whelan, who was made a judge of the Court of Appeal without going via the JAAB route.

Since the Court of Appeal was established in 2014, all appointments to the Supreme Court, except that of Mr Justice Woulfe, were made directly from the Court of Appeal. The last time an outgoing attorney general was elevated directly to the Supreme Court was more than 20 years ago. The only other direct appointee on the current Supreme Court is Mr Justice Donal O’Donnell who was elevated straight from the Bar where he had an established reputation as an accomplished constitutional lawyer.

The background to the appointment of Mr Justice Woulfe underlines the lack of transparency surrounding the system of judicial appointments and the potential for a conflict of interest when an outgoing attorney general is seeking judicial office.

Among the problems is the absence of any information concerning the process for evaluating the suitability of candidates for promotion to the Court of Appeal and Supreme Court. After an opaque process, the final decision on appointment rests with the Cabinet. Any change to that structure would require a constitutional amendment. Many believe it is long past time for reform.