Garda checkpoints stop drug drivers, speeders and van with too many dogs 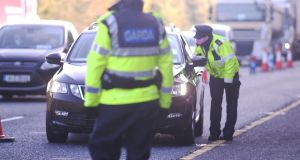 A Covid-19 Garda checkpoint on the M4 earlier this month. Photograph: Bryan O’Brien

Gardaí stopped a number of supected drug drivers, speeding motorists and a van with too many dogs as part of “high visibility” policing on Friday.

Additional Garda checkpoints and patrols are being rolled out nationwide this weekend to help prevent the spread of Covid-19 in the community.

A “high visibility” policing plan which is focused on support for the vulnerable and crime prevention took effect from 7am on Friday and runs until midnight on Sunday.

The measure is in addition to the work being done under Operation Fanacht and Operation Navigation.

Under Operation Fanacht, large-scale checkpoints on national roads are taking place in a bid to reduce unnecessary journeys while under Operation Navigation, members of the force conduct spot checks at licensed premises to see if Covid-19 guidelines are being followed.

The unusually high levels of Garda activity was well publicised but did not prevent Dundalk Roads Policing Unit from detecting a motorist travelling at 160km/h when they were conducting a checkpoint. The driver was stopped and a roadside check proved positive for cannabis and cocaine. The Garda said proceedings would follow.

Naas RPU were performing a checkpoint as part of #OperationFanacht in Naas when they stopped this van. It was found to be uninsured, no tax, had no road worthiness cert & no wing mirrors. The driver also tested positive for cannabis. The driver was arrested. The van was seized. pic.twitter.com/UT3jyTK7b4

Dundalk Roads Policing Unit were conducting a checkpoint as part of #OperationFanacht when they found this vehicle travelling at 160kph. They were stopped and the driver was tested positive for cocaine and cannabis. They were arrested. Proceedings to follow#StaySafe #ArriveAlive pic.twitter.com/gwCQcrP1g4

Wicklow Roads Policing Unit also observed a number of motorists speeding near checkpoints in the Newtownmountkennedy area on Friday. Gardaí said all vehicles were detected driving in excess of the speed limit and drivers were issued Fixed Charge Penalty Notices.

The Dublin West Roads Policing Unit stopped a car on the N4 at Liffey Valley after the driver was observed using a mobile phone while driving. Gardaí also found the car was uninsured. The motorist was issued with a fine and the car was seized.

No tax, no wing mirrors

In Co Kildare, gardaí from Naas were performing a checkpoint as part of Operation Fanacht when they stopped a van.

It was found to be uninsured, had no tax, no road worthiness certificate and no wing mirrors. The driver also tested positive for cannabis. The driver was arrested and the van was seized.

Waterford gardaí were conducting a checkpoint as part of Operation Fanacht when they stopped a car in which nine dogs were found in cramped conditions. The car and dogs were seized and the driver was arrested. The dogs are now in the care of the WSPCA.

This weekend’s policing plan will also see gardaí continue to work with individuals, community groups, statutory agencies, charities and local businesses to provide services to assist and protect the most vulnerable.

Members are engaging with people to ensure compliance with public health guidelines and regulations through the “four Es” approach of engage, educate, encourage, and only where provided for and as a last resort, enforce.

“Since the start of the pandemic, Garda members throughout the country have being helping the vulnerable and those who feel isolated,” he said.

“This involved simple, but important tasks such as collecting their prescription, delivering their pension, or even socially distanced contact. If people need such assistance or know someone who does, please contact your local Garda station. We are here to help.”