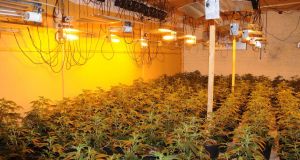 Gardaí have arrested two men following the seizure of €1.5 million worth of cannabis in Dublin.

As part of an ongoing investigation into the sale and supply of drugs in the Crumlin area, gardaí carried out a search on Thursday of a premises in the Ballymount Industrial Estate.

During the search, they discovered a cannabis grow-house with an estimated 1,500 plants, along with approximately 48kg of vacuum-packed cannabis herb.

Gardaí also seized €70,000 in cash during a follow-up search at a house in north Dublin.

The two men, aged 54 and 44, were arrested in connection with the seizures.

They are being detained under the provisions of Section Two of the Criminal Justice (Drug Trafficking) Act, 1996, at Crumlin and Sundrive Road Garda stations.