Pair arrested in Waterford on suspicion of Islamic terrorism 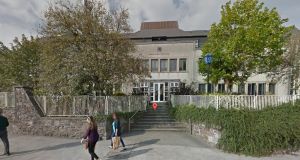 A man and woman believed to be British citizens have been arrested in Waterford city and taken to Waterford Garda station (above) for questioning. File photograph: Google Street View

Gardaí are Thurday evening continuing to question a couple arrested in Waterford as part of an investigation into Irish links with international Islamic extremist groups.

The couple, who are both in their 20s, were arrested by gardaí at a rented flat in Waterford city at around 10am on Thursday morning.

The man, who is Irish and from Waterford, and the woman, who is British, were arrested on suspicion of having committed offences under the Criminal Justice Terrorist Offence Act 2005.

Gardaí suspect that the couple may have been involved in facilitating terrorist offences abroad. The legislation allows for the prosecution of a suspect for offences outside as well as inside the State.

It is understood the arrests follow a lengthy intelligence led operation involving gardaí from the specialist Crime and Security Branch based in Dublin as well as local officers in Waterford city. It is understood gardai have also liaised closely with a number of overseas security agencies including those in the UK charged with monitoring the activities of Islamic extremists.

Gardaí cordoned off the rented property where the couple were arrested and a number of items including mobile phones and computer equipment were seized for examination.

Both suspects were detained at Waterford Garda Station under Section 4 of the Criminal Justice Act which allows gardai detain suspects for up to 24 hours before they have to be charged or released.