Limerick State solicitor was advised to carry a handgun 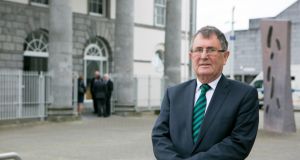 Michael Murray outside Limerick Courthouse: “When I went to Templemore, and I fired a number of handguns, I realised they weren’t really safe in my hands.” Photograph: Brian Gavin Press 22

The city’s gang feud could erupt again at the slightest notice, warned Michael Murphy, who retired on Thursday after nearly 40 years as State solicitor for Limerick.

Cautioning gardaí to “remain vigilant”, he added: “The feud hasn’t gone away – and it wouldn’t take much to reignite.”

He said that after the firebombing of his office and being assaulted walking down the street of his native Limerick, he was encouraged by his closest friends “to consider carrying a firearm” for his own protection.

Murray said that, although he ended up firing a handgun, he never used it to defend himself. His office was burned to a shell in 1994. Serious crime had taken hold, and a notorious gangland feud was about to erupt in the “ancient city well versed in the art of war”.

Murray’s creaking Georgian office, located on O’Connell Street, was an easy target. The bomb was a signal to go quietly into the night. He didn’t. It took 12 months to rebuild the office with bullet-proof windows and steel doors.

Murray said he travelled to the Garda College in Templemore for firearms training so he could become familiar with using a handgun. Despite holding a shotgun licence, to arm himself with a handgun would prove a step too far for him. “Friends of mine said I should consider carrying a firearm. It was suggested to me [by the gardaí] that before I made any decision on it that I should go to Templemore and see what weapons were suitable.”

“When I went to Templemore, and I fired a number of handguns, I realised they weren’t really safe in my hands.”

Getting a sense that possessing a handgun might “up the ante”, Murray told the Garda firearms instructor: “If I need a firearm, there’ll be a young garda walking behind me with it,” he said.

“They’re not easy to handle so I didn’t feel comfortable with them. I think the gardaí’s reluctance was wise.”

Intimidation and threats continued, and his office was firebombed again in 1996. The freshly-built fortress, however, made sure the damage was not as bad as two years previously.

Murray, who went on to instruct numerous senior counsels – including his brother John Murray, a former attorney general, chief justice and European Court judge – soldiered on.

He was followed by criminals; his car was vandalised and gardaí maintained round-the-clock protection at his home.

“I became hypervigilant, in fact. I’m fortunate I have strong resolve and I had the mental strength to deal with it,” Murray said.

He said he never blinked when presented with each new threat. “I couldn’t blink – I learned that from the gardaí, that you just have to suck it up and get on with life.”

Since 1980, every major Limerick Garda investigation file requiring directions from the office of the DPP passed before Murray’s eyes.

He praised juries and witness who courageously attended court despite it being an intimidatory place.

“Juries were never found wanting. I congratulate them in the way they disclosed their civic duty.”

On Thursday, in front of a packed Limerick Circuit Court, squeezed with members of the legal profession and his family and friends, who had all gathered to pay tribute to him, Murray joked about how, on his last day in the job, he “felt like a man going to his execution”.

The irony behind the humorous quip was not lost on him. Breaking down, an emotional Murray thanked his family and his staff of “unsung heroes” who worked alongside him in a “pressure cooker” environment. “It was a big task,” he said.

Murray warned that the Limerick gang feud could erupt again at the slightest notice. Cautioning gardaí to “remain vigilant”, he added: “The feud hasn’t gone away, and it wouldn’t take much to reignite.”

Paying tribute to him Judge Tom O’Donnell said: “There’s an oft-used Shakespearean quotation, misquoted, from Shakespeare’s Othello: ‘He has had done the state some service, and they know it.’ And, by god, does this State know it. “He gave 37 years of superb service – and he’ll be a hard act to follow.”

Helena Kiely, chief prosecution solicitor, on behalf of the DPP, and senior prosecution counsel John O’Sullivan, added to many tributes made to Murray.

Mr O’Sullivan said Murray had carried out his work, preparing case files for the DPP, in a relentless manner.

Michael Murray, who reaches the mandatory retirement age of 70 next month, will continue in private practice with his daughter Aisling.