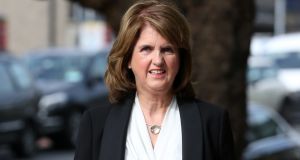 Former tánaiste Joan Burton said she was struck twice in the back of the neck when arriving for a graduation ceremony in Tallaght in November 2014. Photograph: Collins

The former Tánaiste and leader of the Labour Party, Joan Burton, has given evidence about being “terrified” and afraid for her life when trapped in garda vehicles surrounded by water charges protesters in Jobstown, Dublin in 2014.

Ms Burton told a trial in the Dublin Circuit Criminal Court that the three-hour ordeal was “very frightening” and that she and her then adviser Karen O’Connell were “very worried” about what might happen to them if the angry crowd had managed to open the car doors.

She was in the witness box on the first day of evidence in a trial where Solidarity TD Paul Murphy and six others, including two Solidarity councillors, are facing charges of the false imprisonment of the two women by restricting their liberty without their consent, at Fortunestown Road, Jobstown, Tallaght, Co Dublin, on November 15th, 2014.

Ms Burton told Sean Gillane SC, for the prosecution, that she had been invited to speak at a ceremony to mark the awarding of degrees and diplomas to people studying in association with the An Cosán continuing education centre in Jobstown, but that when walking in a procession from the centre to a nearby church, she had been hit on the back of the head twice by objects, one of them being a water balloon.

As she spoke in the church the number of protesters outside increased and she was advised to leave. However when she and Ms O’Connell went out a side door to a waiting garda car, the protesters surrounded it so that it could not move.

People were shouting abuse, banging on the car, and throwing missiles, she said. The abuse was “the usual stuff, bitch, c**t,” derogatory names for women and for gardai. “Just everyday stuff, I suppose, in a way.”

One woman was banging on the car, wishing all sorts of stuff upon her, she said. “Illnesses, death. She was just beside herself with rage.”

At one stage she saw Paul Murphy. “He had a megaphone and he was speaking.” With all the noise she couldn’t hear what was being said.

“He looked pretty happy with himself, I have to say. He was smiling pretty broadly. He was the man with the megaphone.”

After about an hour they moved, on garda advice, to a garda jeep, having to run between two lines of gardaí while doing so. She began to worry that her left shoe was slipping off. “Quite frankly, I was terrified I was going to fall,” she said.

“I kept thinking if the crowd got us, where would we run to, and how would I run without my shoe?”

When they got to the jeep the two women were again surrounded, and ended up stuck in the jeep for another two hours. She saw Paul Murphy walk away in the company of a garda “and he actually looked very happy with himself, very self confident.”

After two hours, on garda advice, they left the jeep and ran to another two cars. They ran across some open ground, surrounded by gardaí.“I felt I was running for my life,” she said.

At times Ms Burton fought to suppress tears as she recalled the events. The court was crowded for her testimony and among those listening were her husband, Pat Carroll, and daughter Aoife.

Asked by Sean Guerin SC, for Paul Murphy, if she recalled hearing any political slogans on the day, she said she said heard Paul Murphy at one stage say “peaceful protest, or something like that”.

She is to continue to give evidence Friday.