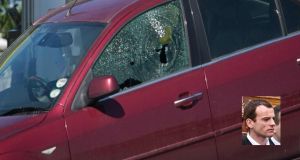 The aftermath of a shooting at a service station in Dublin on Wednesday, along with the victim, James Gately (inset). Photograph: Collins 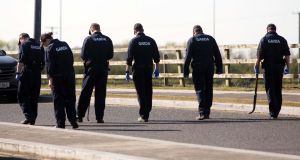 Gardaí at the scene of a shooting on the Clonshaugh Road near Dublin Airport. File photograph: Gareth Chaney/Collins

A man shot in the neck and upper body survived the gangland attack because he was wearing a bulletproof vest, gardaí believe.

The victim, 30-year-old James Gatley from Dublin’s north inner city, was shot as he sat in his car at a service station in Clonshaugh, north Dublin.

Gardaí believe the attack was carried out by gunmen paid by the Kinahan crime cartel, whose leadership has been based in southern Spain for most of the past 15 years.

The injured man, who is recovering in hospital and is expected to survive, is a close associate of the Hutch family. It has been repeatedly attacked by the Kinahan gang over an 18-month period.

The gun violence has been termed the Kinahan-Hutch feud. However, all but one of the 11 murders carried out have been perpetrated by the Kinahan gang.

Following a major Garda crackdown, the violence has dissipated, with the last murder five months ago.

However, there are now concerns yesterday’s attack will lead to a fresh wave of violence.

The feud began when Gary Hutch (34) was shot dead by the Kinahan gang, which he was once a member of, in southern Spain in September, 2015.

The man injured yesterday was Mr Hutch’s closest friend and helped carry his coffin at his funeral.

And gardaí believe he had been a prime target of the gang from the time of his friend’s murder.

The injured man had fled to Northern Ireland for a period after he was formally warned by the Garda his life was at risk.

Gardaí think the Kinahan gang was trying to hire gunmen from outside the jurisdiction to kill him.

While that conspiracy was foiled by the Garda, detectives believe the Dubliner had been put under surveillance by the Kinahan gang in the Coolock area where his partner lives.

And when he left his partner’s house yesterday to drive to the nearby service station he was trailed by two men in another vehicle and shot while sitting in his car just after 1.30pm.