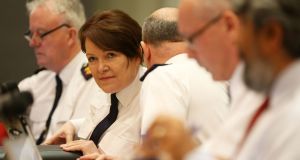 Garda Commissioner Nóirín O’Sullivan at Dublin Castle during a meeting with the Policing Authority on Thursday. Photograph: Brian Lawless/PA Wire

Almost half of all drink-driving prosecutions were struck out last year because court summonses could not be served on the suspect, the Garda Síochána has told the Policing Authority.

Meanwhile, the Garda has made efforts to contact 10,000 of the 14,700 motorists who were convicted of motoring offences without getting the chance to pay a fixed-penalty notice.

However, 1,500 of them have refused to accept registered letters, a Garda delegation led by Commissioner Nóirín O’Sullivan told the authority, which is chaired by Josephine Fehily.

Meanwhile, just one-in-12 of drivers who appeared in court on motoring offences brought their licences to court so driving bans or penalty points could be attached to them.

Summonses go unserved for a variety of reasons but usually because suspects cannot be found to take receipt of the summons sent to their claimed address in the post.

It also emerged at a Policing Authority hearing on Thursday that Garda management has yet to identify how one million alcohol breath-tests carried out became two million in official statistics.

In another development, a review of Garda homicide figures has revealed killings that were classified as non-fatal offences causing harm.

Deputy Commissioner John Twomey said the investigations into the domestic homicides, which mostly involve men killing their wives or partners, were investigated despite “inaccuracies” with classifications.

Dr Gurchand Singh, who is in charge of the Garda’s data analysis team, said he could clearly remember “three or four cases” of domestic homicides having been classified in official Garda records as assaults causing harm when his analysts reviewed the homicide figures.

A chief superintendent had made an unspecified query about domestic murders leading to the analysts reviewing the data. They cross-checked the Garda’s Pulse records for the crimes against the records of State Pathologist Prof Marie Cassidy. The review was later expanded beyond domestic murders when it became clear there were issues with how some killings were recorded.

In total, 41 homicides between 2013 and 2015 were reviewed against the Garda investigation files to ensure a full inquiry was carried out even though the classification of the crimes was incorrect.

None of the Garda officers before the authority yesterday offered any information on the nature of the misclassifications other than Dr Singh recalling “three of four” domestic homicides had been classed as non-fatal assaults.

A report on the review of the homicide figures had been submitted to the Policing Authority but had only been received late on Wednesday night leaving no time for its review.

The errors in the homicide figures aside, yesterday’s hearing was dominated by roads policing. An interim report on last month’s revelations about breath testing has been compiled by Assistant Commissioner Michael O’Sullivan.

However, his inquiries were not yet completed. The Garda Commissioner, Ms O’Sullivan, said the inquiry had not identified “one single cause” for the inflating of data.

However, it was “a matter of great concern” that road safety in the Republic was deteriorating after improving for a number of years. Fatalities and serious injury had risen by 15 per cent and 34 per cent respectively since 2012.

Policing Authority member and former Road Safety Authority chief executive Noel Brett said he was concerned about how Garda manpower and other resources, including vehicles, were assigned to traffic units. In the Cork City division there were 3.7 gardaí per vehicle in the traffic unit but in neighbouring North Cork there were 33 Garda traffic members per vehicle.

Mr Brett’s colleague Maureen Lynott also pointed out that in the first quarter of this year the Garda had recorded 21,000 checkpoints nationally. But there was still very significant discrepancies in the levels of activity per traffic garda.

In Cork West, for example, each traffic garda had conducted an average of 105 checkpoints but their colleagues in Westmeath had conducted 14 each.

Ms Lynott wondered if some over-recording was still taking place. However, Assistant Commissioner Michael Finn said that in some areas activity was higher because there were more main roads or because crime rates were lower and more resources could be channelled into roads policing.