‘Do you have a thing called a report that has a start and an end?’ - Authority asks Garda Commissioner 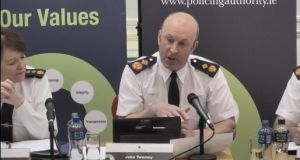 There have been testy exchanges between the chair of the Policing Authority Josephine Feehily and the Garda Commissioner Noirin O’Sullivan over the Garda’s review of homicide figures.

At a public meeting of the Policing Authority on Thursday the Commissioner was asked for a report on the review of the figures after the meeting was told a number of domestic murders have been classified in official Garda records as assaults causing harm.

It had emerged that the killing of some women in their homes were assigned to the non-fatal offences category.

Details of how this happened were delivered to the Policing Authority late on Wednesday.

“We received much of the material far too late to give it proper consideration; in one case 8:30 last night,” Ms Feehily told the Garda Commissioner.

“But I want to assure you that we will be considering it this afternoon and we will be responding to you.”

That was just one of a number of sharp exchanges between the women.

At another point in the hearing, Ms Feehily was clearly becoming impatient at the explanations being offered for how the review of the homicide data came about.

“Do you have a thing called a report that has a start and an end that we could have a copy of?” she asked.

At another point Ms O’Sullivan tried to explain the late delivery of the homicide report on Wednesday night by suggesting the matter was not on the agenda for today and that the report had been supplied simply to be of assistance to the authority.

However, her assertion was rejected out of hand by Ms Feehily.

“There can be no doubt that this matter was going to be raised with you today,” she told Commissioner O’Sullivan.

“At our policing performance committee it was made very clear we would be asking about it. And in fact, yesterday’s newspapers told us that you would be telling us about it.

“So the fact that we didn’t list every single line question on an agenda does not mean that it won’t be raised. The raising of this issue was flagged a number of weeks ago at a policing committee meeting which I attended myself.”

Speaking about the homicide data, Dr Gurchand Singh, who is in charge of the Garda’s data analysis team, said he could clearly remember “three or four such cases” of domestic murders have been classified in official Garda records as assaults causing harm when his analysts reviewed the homicide figures.

A chief superintendent had made an unspecified query about domestic murders leading to the analysts reviewing the data.

They cross-checked the Garda’s PULSE records for the crimes against the records of State Pathologist Prof Marie Cassidy.

The review was expanded beyond domestic murders. In total 41 homicides between 2013 and 2015 were reviewed because the analysts found some form of classification issue with them.

However, senior gardaí have insisted while the classifications may have been wrong and the murders recorded as non-fatal assaults, full investigations were carried out.

On the issue of inflated alcohol breath tests, the senior Garda team told the authority they still could not explain how one million tests carried out was inflated to two million in the Garda records in the five year period to 2016.

It also emerged that a third of the 15,000 drivers wrongly convicted in the courts of road traffic offences have not yet been contacted to have those convictions overturned.

Of the 10,000 wrongly convicted drivers that have been contacted by registered letter, 1,500 letters have come back undelivered.

“They refused to accept the registered letters and so we are now going out to them ourselves to deliver them,” Assistant Commissioner Michael Finn has told the Policing Authority.

Responding to a line of questioning from authority member Vicki Conway, he said about 5,000 of the near 15,000 motorists who need to be contacted so their wrongful convictions could be appealed had not yet been contacted.

“This is going to take a while,” he said in explained the delay.

He confirmed 1,500 letters had been returned undelivered.

And while 3,000 people had accepted delivery of the letters he did not make it clear whether they were content to allow the Garda appeal their wrongful convictions or how they had responded.

Mr Finn said about half of the 10,000 people contacted had made no reply to the Garda as yet.The convictions have arisen over a near 10-year period since the penalty points system was introduced.

Some motorists were never sent a fixed charge notice and so had not opportunity to pay their fines. Instead, their cases wrongfully went to court in the first instance.

In other cases, motorists were sent FCNs and paid the fines. However, their cases continued to progress through the criminal justice system and they were summoned to court.

In total, 147,000 people were wrongfully summoned to court. Of those, about 14,700 motorists were convicted and a sanction imposed.