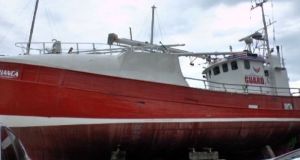 The ‘Bianca’ was intercepted as it entered UK waters off the coast of Cornwall, England. Photograph: NCA/PA

A fishing boat that was caught with €94 million of cocaine is up for sale in Belfast on Thursday.

The Bianca was caught with 93kg of cocaine on its way to the UK last year, the biggest seizure of the drug in the UK for 2016.

The fishing boat’s skipper, Michael McDermott (68), from Co Waterford, was convicted of drug-importation offences following a week-long trial at Bristol crown court and was jailed for 16 years. His shipmates David Pleasants (57) from Grimsby was jailed for 14 years and Gerald Van de Kooji (27) from the Netherlands for 12 years.

The boat will go on sale at the Wilsons Auctions Belfast branch on Thursday at 6pm with most of the lots proceeds of crime.

Featuring alongside the Bianca are six show-jumping stallions, a range of cars, watches, shoes, artwork and Beatles music memorabilia. Wilsons Auctions said online bidding was also available to “a worldwide audience” while all items would be sold to the highest bidder.

It added it had “no indication” as to how much the Bianca would go for. “Because tomorrow’s auction is unreserved, it will go to the highest bidder so we have no indication at this stage,” they said.

The Bianca was intercepted as it entered UK territorial waters off the coast of Cornwall and officers boarded, detaining the crew. All three men were arrested by the National Crime Agency (NCA).

Investigators were able to establish at the time that McDermott had bought the Bianca in Whitstable, Kent, for £17,000, paying in cash weeks before his arrest. He told the seller he planned to sail to Spain and use the vessel for diving and chartered angling trips.

The boat was taken to Ramsgate for work to be carried out on it before it set sail.

Investigators found 38 bales of cocaine, each weighing 25-30kg, hidden under bags of sand and gravel in the boat’s fish hold.

Speaking after McDermott’s trial, Mark Harding, senior investigating officer from the NCA’s border team, said: “This was a huge quantity of cocaine, the biggest single seizure made in the UK in 2016.

“Michael McDermott used his special skills as a sailor to attempt to evade border controls. We provided solid evidence that led to his conviction and have taken out another means of transport used by organised criminals to bring drugs to Britain.”