Feud making life ‘unbearable’ for some in Drogheda, mayor says 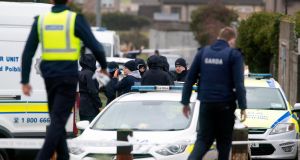 Gardaí are pictured searching an area around a house in Rathmullen Park, Drogheda, Co Louth last week following the death of Keane Mulready-Woods as part of a local gang feud. A march against criminal activity in Co Louth is taking place in Drogheda on Saturday. Photograph: Colin Keegan/Collins.

A march against criminal activity in Co Louth is taking place in Drogheda on Saturday.

Taoiseach Leo Varadkar has said he will attend the march as has Labour leader Brendan Howlin, Fianna Fáil’s justice spokesman Jim O’Callaghan and a number of local representatives.

Those taking part in the ‘Standing Together’ demonstration will assemble at the Bridge of Peace at 1.30pm. They will then march to St Peter’s Church on West Street at 2pm, where a number of speakers are due to address a rally.

The march comes less than two weeks after the murder and dismemberment of Keane Mulready-Woods (17), who was targeted in an escalating gang feud in Drogheda that has now claimed three lives.

Paul Bell, the Mayor of Drogheda, said there is a “considerable amount” of fear and anxiety in the town due to the increasing violence and that some people are suffering from “terror fatigue”.

The Labour councillor told RTÉ Radio’s Morning Ireland that the violence was bringing “misery” to the community and had created a situation where in “some areas of our town people are finding it unbearable to live”.

Mr Bell said the people of Drogheda are coming together and understand that “it is not just a Garda issue”.

“It is not just an issue for the legislators of our country. But it is a community issue,” he added. “Drogheda in its history has had many challenges over its 900 year period and this challenge will be met by the people.”

Mr Bell said there is an understanding among people in Drogheda and the surrounding area “that they have to come together to confront this issue and to support the authorities as they try to address what is a very serious and ongoing feud”.

Mr Varadkar said on Thursday that he planned to attend the march but stressed that he did not want to politicise the event.

Mr O’Callaghan said gangland violence has reached “new levels” with the “shocking”murder and dismemberment of Mulready-Woods.

“It’s has brought gangland criminality back into the spotlight and is now something which must be addressed,” the Dublin Bay South TD said.

1 Coronavirus: Tenerife hotel in quarantine after tourist tests positive
2 Woman in her 30s arrested after man fatally stabbed in Co Dublin
3 Irish health officials to ramp up precautions against coronavirus
4 Graduates 'not well-equipped' for future workplace
5 McDonald says SF meetings not ‘an affront to democracy’
Real news has value SUBSCRIBE