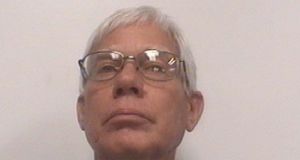 Thomas Martens, convicted of murdering his Irish son-in-law, Jason Corbett, in the US almost five years ago, has failed in his bid to be released from prison due to fears of contracting coronavirus.

A former FBI agent convicted of murdering his Irish son-in-law, Jason Corbett, in the US almost five years ago, has failed in his bid to be released from prison due to fears of contracting coronavirus.

A US court ruled on Wednesday that Thomas Martens (70) must remain in prison pending an appeal against a recent ruling that he and his daughter should face a retrial on the charge of murdering Mr Corbett.

Mr Martens and his daughter, Molly (36), Mr Corbett’s second wife, were given a 20 to 25 year jail sentence following a trial in 2017 at which they were found guilty of the second-degree murder of the Irish father of two.

Mr Corbett, a 39-year old who came originally from Limerick, died from head injuries sustained in an attack with a baseball bat and paving stone at his family home in Wallburg, North Carolina on August 2nd, 2015.

Lawyers for Thomas Martens applied on Tuesday for their client’s release from prison after a decision by the North Carolina Court of Appeal in February to order a retrial for him and his daughter for Mr Corbett’s murder.

They told the Davidson County Superior Court in North Carolina that Mr Martens was at an elevated risk of being infected with the Covid-19 virus due to his age.

Mr Marten’s legal team asked the court to release him on a €200,000 bond on condition that his whereabouts would be electronically monitored.

The court heard that Mr Martens did not pose a flight risk and was willing to voluntarily submit himself to house arrest at his son’s home in Union County, North Carolina.

However, the motion was opposed by the Davidson County District Attorney’s office which argued that Mr Martens faced a risk from the virus both at home or in prison.

Lawyers for the district attorney argued prisoners convicted of murder should not be included in the release of any prisoners from jails in North Carolina in response to the Covid-19 pandemic.

They also read out a letter on behalf of Tracey Corbett Lynch, Mr Corbett’s sister, who also opposed the release of her brother’s killer.

Ms Corbett Lynch and her husband, David, were granted full custody of her brother’s children from his first marriage, Jack and Sarah and they now live with the couple in Limerick.

In the letter Ms Corbett Lynch said the two children had specifically asked her to write to the court to express their concern.

She said they “are still extremely worried about either of the Martens being released from prison” .

She claimed her family would regard any temporary release of Thomas Martens from custody as “unwarranted and deeply upsetting” and “insulting to Jason’s memory”.

Ms Corbett Lynch said Mr Martens had never shown remorse for his actions or offered an apology for Jason’s death.

She claimed he had caused her family “immeasurable hurt” over the past five years by what she described as his “consistent attempts to slander my brother and besmirch his good reputation.”

Judge Mark Klass denied the bond motion that Mr Martens should be released from prison.

The appeals court had ruled that Mr Martens and his daughter must remain in prison as the Attorney General of North Carolina has challenged the recent decision to order a retrial.

The North Carolina Supreme Court is reviewing the ruling to overturn the conviction and order a retrial but is unlikely to reach a decision for several more months.

Mr Martens claimed he had acted in self-defence after responding to some sort of disturbance in the couple’s bedroom where he found Mr Corbett choking his daughter.

Lawyers for the father and daughter claim they did not get a fair trial back in 2017 after critical evidence was excluded from being put to the jury by the trial judge.

In reaction to the outcome of Tuesday’s bond hearing, Ms Corbett Lynch said her family would keep “fighting the good fight every step of the way” and thanked the North Carolina judicial system.