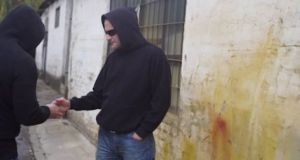 Researchers concluded the increase in illicit street tablet use is being facilitated by three sources; organised crime, online “pharmacies” and over-prescription of the drugs by doctors. File photograph: Getty

Over-prescribing of drugs by doctors is helping to drive an increase in the illicit sale of “street tablets” which has griped Ireland in recent years, according to a new study.

The number of people becoming addicted to drugs such as benzodiazepines and pregabalin, and the number dying of overdoses after taking them, has increased dramatically in recent years, research conducted by University College Cork, the Ana Liffey Drugs Project and the Health Research Board shows.

In the case of pregabalin, a drug used to treat a wide range of ailments such as epilepsy and anxiety,overdose deaths increased from 14 in 2013 to 65 in 2016, a 364 per cent rise. Health authorities only started testing for the presence of the drug postmortem in 2013.

There have also been significant increases in non-fatal overdoses involving other street tablets such as benzodiazepines and “z-drugs”, which are used to treat insomnia.

Researchers concluded the increase in illicit street tablet use is being facilitated by three sources; organised crime, online “pharmacies” and over-prescription of the drugs by doctors.

Over-prescribing was potentially allowing users to sell unused tablets on the street, the research found. The number of fatal overdoses involving pregabalin is “strongly correlated” with the increase in prescriptions for the drug.

A robust electronic prescribing system could help stop “leakage” of prescribed drugs onto the street. It could also help prevent so-called “doctor shopping”, the practice of visiting multiple doctors to get prescriptions.

However, researchers also warned that more stringent controls on prescriptions could inadvertently cause people to resort to buying drugs on the street.

“Thus, to be effective in reducing harms from tablet use, there is a need to understand and be effective in addressing why individuals are using tablets in the first place...”

There is also evidence to show organised crime gangs are importing increasing amounts of street tablets into the country and, in some cases, manufacturing the drugs themselves.

Premade tablets usually come from India and Pakistan. In 2018, seizures of drugs such zopiclone, zolpidem and benzodiazepines in powder form indicated gangs were also using specialised equipment to make the tablets here.

However, “tableting machines, when found in Ireland, have tended to be slow and old compared with those found elsewhere in Europe, ” the report stated.

Increasing numbers of individuals are also purchasing street tablets from online pharmacies which are typically based outside of Ireland, are unregulated and do not require prescriptions. These websites are typically located on the “surface web” rather than the “dark web”, meaning users require a minimum of computer knowledge to access them.

“Taking into account this improved technological form of distribution, it is perhaps not surprising that people are using street tablets in higher amounts, resulting in higher demand.”

These drugs are shipped into Ireland by post and sometimes sold on again over social media. The relatively small quantities involved in individual purchases makes their detection very difficult for the authorities.

The researchers suggested a range of measures to combat the street drug trade including the possibility of providing addicts with “prescribed tablets of a known purity in order that they do not access the street tablet market.”