Man accused of robbing shop with knife to appear in court

The man, in his late 40s, was arrested following the robbery in Walkinstown 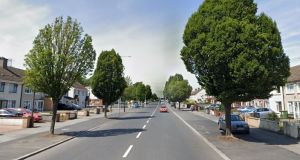 A man is due to appear in court on Monday charged with the robbery of a shop in Walkinstown, Dublin.

The man, in his late 40s, was arrested following the robbery on Saturday at Walkinstown Avenue.

Gardaí said that at approximately 4.55pm, a man entered the shop and threatened staff with a knife. A quantity of cash was taken from the cash register and the man fled the scene on a pedal cycle.

The man was arrested a short distance away and detained at Crumlin Garda Station under Section 4 of the Criminal Justice Act 1984. The cash taken was recovered.

He has since been charged in connection with the incident and will appear before the Criminal Courts of Justice, Dublin on Monday morning.