Conor McGregor has returned to court in New York and expressed regret for his role in a melee at an event in April to publicise a series of UFC fights at a Brooklyn arena. Video: Reuters 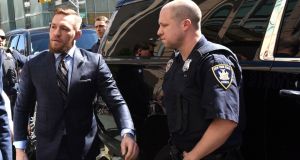 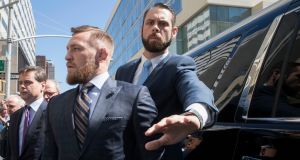 UFC champion Conor McGregor has been ordered to appear in a US court on July 26th in connection with an incident in New York which left two of his rival UFC fighters injured.

Mr McGregor and his fellow UFC colleague Cian Cowley made a brief appearance at Brooklyn Criminal Court in connection with the attack on a bus after a press event at the Barclays Centre in Brooklyn on April 5th.

Assistant attorney general Janet Gleeson told the court on Thursday that plea discussions are taking place, and the case had not been brought before a Grand Jury.

Both Mc Gregor (29) and Cowley (25) attended the court hearing which lasted less than a minute.

Mr McGregor arrived to the Brooklyn court house in a black SUV and was greeted by a heavy police and media presence. Dressed smartly in a dark grey suit he entered the courthouse only to emerge less than ten minutes later, where he briefly addressed the media.

In a statement outside the court he said: “I regret my actions that led me here today. I understand the seriousness of this matter and I am hopeful that it gets resolved soon. Thank you very much”.

Mr Judelson, who was also involved in the Harvey Weinstein bail process, said that Mr McGregor was very professional and had engaged with the legal process at every step.

It is understood Mr McGregor and Mr Cowley will spend some time in New York before returning to Ireland.

The fact that the case has not been sent before a Grand Jury means that the plea discussions are likely to be progressing behind the scenes. If Mr McGregor succeeds in striking some form of plea bargain, he could avoid jail or a fine.

Mr McGregor’s manager Audie Attar told US media that he expects the case to be wrapped up on July 26th, and that McGregor would not return to the Octagon until the case was finished. “Today we’re focused on court, we’re not going to focus on any future plans until we handle this matter and right now we’re in good negotiations with the District Attorney so we’re going to focus on the future later,” he told news website MMA Fighting.

Mr McGregor and fellow MMA fighter Mr Cowley turned themselves into police after the incident at the Barclays Centre in April and appeared in court the following day after spending the night in jail.

Mr McGregor was charged with assault, criminal mischief, reckless endangerment and menacing during his first court appearance. He was released on bail of $50,000.

Footage of his attack on a bus was captured on mobile phones and widely shared on social media. The footage showed Mr McGregor attacking a bus after a media event at the Barclays Centre in Brooklyn. Two UFC fighters, Michael Chiesa and Ray Borg, were injured by flying glass during the attack and were forced to pull out of a UFC 223 event the following weekend.

Mr McGregor, who was born in Crumlin, Dublin, was named as the fourth wealthiest athlete in the world by Forbes Magazine earlier this month, jumping twenty places from the previous year, thanks in part to his high-profile fight with Floyd Mayweather last year. Forbes estimated McGregor’s earnings at $99 million.