Rural crime initiative abandoned due to poor uptake by farmers

Theft Stop to be replaced by sophisticated property marking scheme 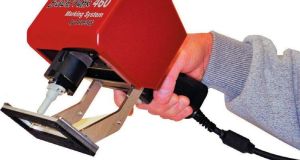 Under the Property Marking scheme, local councils buy a “telesis device” which uses laser technology to mark items, from tractors to mobile phones, with the owner’s Eircode

A scheme established three years ago to combat rural crime by getting farmers to mark their property with unique identifiers has ceased after fewer than 100 people took part.

Under the Theft Stop initiative, farmers were assigned a unique number which was linked to an online database. They were encouraged to mark their vehicles and equipment with this number and to upload photos to the database.

If the property was stolen an alert was sent out to all members of the scheme in case it was offered for sale.

It is understood the price of the scheme was off-putting for many farmers. It cost up to €75 for a stencil kit and a gate sign featuring the Theft Stop scheme logo.

Theft Stop was launched by the Garda and the Irish Farmers Association (IFA) in 2016 in response to a big rise in rural burglaries and thefts.

As recently as last month in the Dáil, Minister for Justice Charlie Flanagan listed the scheme as part of the Government’s response to rural crime.

However, this week the scheme was brought to an end and most of the website was shut down. Although a few thousand signed up and several hundred people bought the stencil equipment, fewer than 100, of the roughly 137,000 farm owners in Ireland, uploaded details of their equipment to the website, according to Garda sources.

IFA crime prevention officer Barry Carey said the scheme was abandoned as it was time to update rural crime prevention methods. “We’ve moved on in technology. Processes in farming move on all the time. This is no different.”

Theft Stop is to be replaced by a new scheme known as Property Marking, which is operated by a not-for-profit company based in Co Tipperary. However, unlike Theft Stop, it will be available to all members of the public, not just farmers.

Under the Property Marking scheme, local councils buy a “telesis device” which uses laser technology to mark items, from tractors to mobile phones, with the owner’s Eircode.

The council will then lend these devices to communities for a few days. If they are brought to a central location, such as a GAA club, residents can bring their valuables to be marked.

Monaghan, Cavan and Sligo county councils have each purchased one of the devices, which cost more than €4,500, said Property Marking development manager James O’Neill.

Donegal, Louth, Clare, Tipperary and Galway councils have also each agreed to purchase one.

Mr Carey said that there is a “major drive” to mark farmers’ property to ensure it can be recovered and that thieves can be prosecuted.

At a Garda property recovery day recently held in Nenagh “99 per cent” of the stolen goods couldn’t be returned to their owners because they didn’t have unique markings, he said. “And nearly all perpetrators caught in possession of them couldn’t be prosecuted.”

“There were 500 items: ride-on mowers, quad bikes and trailers and all sorts of power tools. It was extraordinary.”