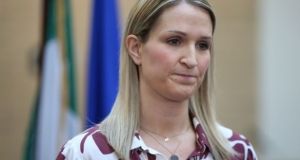 Minister for Justice Helen McEntee said the legislation should become law by the end of the year. Photograph: Nick Bradshaw

The Cabinet has approved plans to make the non-consensual sharing of intimate images a criminal offence, punishable by up to seven years in prison.

The legislation which was first drafted by Labour three years ago, will go before the Oireachtas justice committee next week and should become law by the end of the year, Minister for Justice Helen McEntee said. It is expected to receive cross-party support.

For the first time, the non-consensual sharing of intimate images will be a criminal offence. This will be the case regardless of the intent of the person sharing the material.

She said Cabinet signed off on 20 amendments to the legislation on Tuesday, including provisions which make it a more serious offence to share images with the intention of causing the subject harm.

Earlier on Tuesday, Labour leader Alan Kelly accused the Government of trying to take credit for the Bill.

“There’s neck in politics, and there’s neck,” he said. “This is a Labour Party Bill the Government have copied.

“Now, that’s a form of flattery and we take the flattery, but at least acknowledge it.”

She said she had brought forward several important amendments, such as setting a maximum term of seven years for the sharing of images with the intent to cause harm.

Those sharing images without intent to cause harm will face a maximum 12-month sentence and a €5,000 fine.

The legislation will also allow judges to impose harsher sentences if the person sharing the images had previously been in a relationship with the victim.

The law will apply to adults and teenagers but the Garda will have to get permission from the Director of Public Prosecutions to bring charges against anyone under the age of 17.

Ms McEntee said it was a “coincidence” that the matter was brought to Cabinet a week after news of the alleged leak of thousands of intimate images of Irish women came to light.

The matter was reported to gardaí by the victim advocacy group Victims Alliance, which said some of the photographs appeared to have been taken without the subjects’ consent or knowledge. Garda investigations are ongoing.

The Non-fatal Offences against the Person Act 1997 will also be updated to make it an offence to harass someone on all forms of media, including social media, the Minister said.