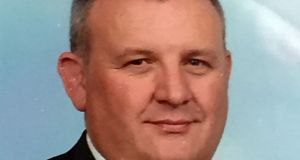 A dissident republican who killed an off-duty prison officer in Northern Ireland will serve a minimum of 22 years in prison, a judge said.

Mr Ismay, a 52-year-old married father-of-three, died 11 days after suffering serious leg injuries when the Semtex bomb exploded underneath his van shortly after he had driven away from his east Belfast home in 2016.

“The defendant played an important and integral role in planning and carrying out the terrorist operation which resulted in the death of Mr Ismay.”

He drove the vehicle on the night of the attack to transport another person involved across Belfast before and afterward.

Robinson has been given a life sentence for the murder but will be eligible to apply for release under licence after 22 years, the judge said.

The extremist group that styles itself as the ‘New IRA’ claimed to have carried out the attack on the long-serving officer.

Mr Ismay was released from hospital after the blast on March 4th and had been making good progress, but he died unexpectedly less than two weeks later when a blood clot linked to the attack triggered a heart attack.

He had worked at Hydebank Wood Young Offenders’ Centre in south Belfast, where he trained new recruits to the Prison Service.

He was a St John Ambulance volunteer and deeply committed to all parts of the community, the judge said.

He added: “He was a decent, warm, generous, loving human being and our society is the poorer for his loss.

His family has been left bereft.

Robinson was entirely without remorse, the court heard.

Mr Justice McAlinden added: “In our troubled society prison officers and police officers have been regularly targeted at home and off duty simply because in those environments they are deemed to be easier targets.

“In such circumstances the need for deterrence can be no less acute and obvious.”

The judge said Robinson searched for information on the internet about the magnetic permeability of aluminium before the device was attached to the van.

He was intimately involved in targeting him over a lengthy period of time.

The defendant checked his target’s online profile as well as the opening times of a supermarket near where he lived.

Mr Justice McAlinden said the defendant knowingly took steps to minimise the chances of his “intimate and inextricable” involvement being uncovered by turning off his mobile phone at certain times, deleting entries from its memory and putting the sim card and battery out of reach of police.

He also arranged with his brother for CCTV from a nearby hostel to be disconnected and setting the system to “dramatically reduce” the period of retention of images.

He told detectives “blatant and obvious” lies as part of a pre-prepared statement to police during interview.

“Each of these statements, in their own individual and eloquent way, brings home to me the utterly devastating impact that Mr Ismay’s death has had, not only on them but on other members of the family.”

A Police Service of Northern Ireland (PSNI) detective said he was pleased a significant custodial sentence had been imposed on Robinson and paid tribute to the dignity of the victim’s family.

Detective Superintendent Richard Campbell said: “This attack on Adrian Ismay was a cowardly attack on someone going about their work.

“This was a dedicated public servant who had dedicated his career to serving the public, both in his job as a prison officer but actually beyond that as a volunteer within the community in a number of areas.

“Our society is a worse place for his loss.

“That puts into stark contact the actions of those who carried out the attack on him, including Christopher Robinson.

“It was a cowardly and callous attack on him, to target him at his house as he was about to go and do his work within the community.”