New legislation on Garda powers of arrest, search and detention

Details of updated laws to be outlined to Government this year, says Minister 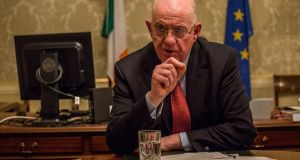 Minister for Justice Charlie Flanagan: The issue is challenging but important to the placing of human rights at the core of the work of An Garda Síochána. Photograph: James Forde

New legislation on Garda powers of arrest, search and detention, with associated codes of practice, will be outlined to the Government later this year, Minister for Justice and Equality Charlie Flanagan has said.

He told a conference on policing and human rights that the issue is challenging but important to the placing of human rights at the core of the work of An Garda Síochána.

The relationship between human rights and policing is a multi-dimensional one, the Minister told the conference at NUI Galway.

“Members of An Garda Síochána have powers including to arrest, search or detain, which may involve interference with the rights of some individuals in certain circumstances.

“These powers are appropriately and necessarily circumscribed and prescribed by law, but they have grown up in a piecemeal fashion over decades and are not sufficiently clear to individuals.”

The Garda Commissioner, Drew Harris, in his address to the conference, also referred to the tensions between policing powers and human rights.

The vindication of human rights is a key policing objective, and is in fact the very basis of policing, he said.

“Given the nature of police work, gardaí also have the power and obligation on occasion to curtail human rights (for example through stop and search or arrest).

“Gardaí have these powers so as to ensure that the rights of others are protected. Proper exercise of these powers is not always straightforward, particularly in light of the discretion which is vested in gardaí.”

Choices about the use of discretion often have to be made in complex, unclear and emotionally stressful situations, sometimes requiring a decision to be made on the spot, “often within seconds,” and without preparation.

A human rights section within An Garda Síochána was established late last year and aims to ensure that Garda personnel are aware of the standards that are required.

During his time with the Police Service of Northern Ireland, Mr Drew said, he was responsible for “difficult areas of operational policing that involved the use of police powers to resolve real life dilemmas. The application of human rights provided a route through.”

Mr Flanagan, during his address, referred to the murder last week of the journalist Lyra McKee in Derry by members of the so-called New IRA.

Ireland, like many other open and democratic states, faced threats from international terrorism and the cyber domain that present new and significant challenges to the security services, he said.

“Sadly, the more traditional security threat remains. The senseless and horrifying killing of Lyra McKee in Derry is a tragic reminder of the real and persistent security threat from republican paramilitaries. Those who killed her had no thought whatsoever for the human rights or the democratic wishes of the communities they cynically purport to represent or defend.”

The Act marked the “end of the beginning” in Irish society, Mr Flanagan said. “It paved the way for the outcome of the Marriage Equality referendum in 2015 and for the increasingly open and pluralist society we have today.”

The conference, on Policing, Human Rights and Communities, was hosted by the School of Law and Irish Centre for Human Rights in NUI Galway.

*This article has been amended to correct a typographical error