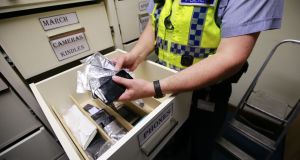 Customs officers and police must undergo security checks at Irish airports each time they move between restricted and public areas following a security review, it has emerged

The change comes as a consequence of findings in a secret report by a Paris-based inter-governmental airport security agency after it investigated risks at Dublin Airport last year.

Minister for Transport Shane Ross said the European Civil Aviation Conference report made a series of recommendations. These included the need to curb security threats posed by airport employees.

The Irish Aviation Authority conducted a “detailed risk assessment in the wake of the report . . . but it accepted the need to ‘mitigate insider threat’ ”, said Mr Ross.

Under the changes, customs and airport police must be screened each time they move between secure areas and open areas, such as the arrivals hall, though many are obliged to do so on multiple occasions during a shift.

Fianna Fáil’s Mr John Lahart said staff feel “wounded” by the changes. He added that delays caused by mandatory screening could impede the “pursuit of suspects who may be carrying drugs or illegal cigarettes”.

He also said there are concerns that evidence seized by customs officers during the screening could be contaminated and jeopardise prosecutions.

“While there is always an element of adjustment and inconvenience to individuals, these new measures are in the broader public and national interest. As threats and risk to civil aviation change over time, so too must the security response. This requires those people charged with providing security to be flexible and innovative,” he said.

The Minister added that he has “no intention, or desire, to interfere in softening any security measure that brings aviation security to a higher standard”. He also noted that details about security rules remain highly confidential.

“They are being asked to divest themselves of all their protective clothing gear, stab vests, handcuffs, limb restraints and first-aid kits at a normal X-ray machine multiple times a day,” she said.

“It is utterly chaotic and they cannot do their work properly,” she added. Ms Daly said airport staff should be given full background checks applied to gardaí and soldiers who continue to be exempt from the new security rules.