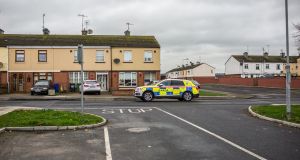 A house in Drogheda was badly damaged in a suspected arson attack late on Thursday night.

The attack on the house took place in the Moneymore estate in the town a short distance from where a man was shot and injured in a gun attack in the Co Louth town yesterday.

Gardaí believe the victim of the shooting was targeted by one of the two local drugs gangs involved in a worsening feud in Drogheda. The Moneymore estate where the late-night arson attack took place has been the scene of feud violence over the last number of months. In November, a man in his 20s was found stripped, beaten and stabbed in a bath by gardaí who burst into a house in the estate.

“At approximately 23.50 hours, the front sitting room window of a house was damaged when three youths threw a suspected device into the house.

“No persons were injured but a considerable amount of damage was done to the house. Investigation are ongoing. Any information can be reported to Drogheda Garda Station on 041 - 9874200.”

The gun attack victim was treated in hospital on Thursday having been shot three times as he worked on a property in Drogheda with a number of other men.

Gardaí said eight or nine shots were fired and that the people the victim was working with were lucky they were not also wounded.

The victim was bringing materials from the front of a house in Drogheda to the rear with a number of other men when the gunman opened fire in the Hardmans Gardens area just before 4.30pm.

The shooting took place in a busy residential area and near a supermarket.

The victim, a foreign national in his 30s, was wounded twice in the leg and once in the shoulders. Gardaí believe the gunman was driven to and from the scene by an accomplice in a red VW Golf with false registration plates 191 D 31786.

The vehicle was later found burnt out in the Sheephouse area a the Rathmullen Road in Drogheda.