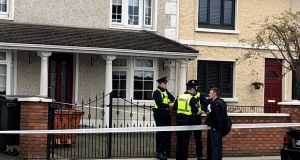 Gardaí believe the gunman was driven to and from the scene by an accomplice in a red VW Golf with false registration plates. Photograph: Ciara Wilkinson

A man was recovering in hospital on Thursday night having been shot three times as he worked on a property in Co Louth with a number of other men.

Gardaí said eight or nine shots were fired and that the people the victim was working with were lucky they were not also wounded.

The victim was bringing materials from the front of a house in Drogheda to the rear with a number of other men when the gunman opened fire in the Hardmans Gardens area just before 4.30pm.

The victim, a foreign national in his 30s, was wounded twice in the leg and once in the shoulders.

Gardaí believe the gunman was driven to and from the scene by an accomplice in a red VW Golf with false registration plates 191 D 31786.

The vehicle was later found burnt out in the Sheephouse area a the Rathmullen Road in Drogheda.

Gardaí believe the victim was targeted by one of the two local drugs gangs involved in a worsening feud in Drogheda.

It appears the man targeted was singled out to be shot dead because of his associations with members of the rival gang.

He was taken from the scene to Our Lady of Lourdes Hospital and was expected to make a full recovery.

Fianna Fáil TD Declan Breathnach said yesterday’s attack demonstrated the “level of depravity the thugs who carry out these acts will sink to”.

“The shooting of a man in broad daylight, in the vicinity of schools, a church and shops is deplorable,” he said.

“Any number of innocent people could have been caught up in the attack. It is the ordinary citizens who are suffering at the hands of a minority.”

Additional armed patrols had already been deployed in Drogheda in a bid to quell the violence. A feature of the feud has been gun attacks carried out in busy residential and retail areas during daylight hours.

In February, a man was shot in the neck as he sat in a car in a retail park in Drogheda. A close associate of that man was shot and left paralysed when a gunman tried to murder him last July.

And in another incident last summer, a man was found in the bath of a house stabbed and beaten after gardaí burst into the property on receiving a tip off a man was being tortured.

A number of other non-fatal gun attacks as well as pipe bomb and arson attacks have been linked to the feud. On Monday, gardaí searched lands in Drogheda and discovered a firearm and pipe bomb components.

Early on Tuesday, a house in Drogheda suffered minor damage when a petrol bomb was thrown through a downstairs window.

One of the leading criminal figures in one of the feuding gangs is due for release from prison in the weeks ahead, with gardaí braced for a surge in violence on his release.

Supt Andrew Watters described yesterday’s gun attack as “callous and reckless”, adding the gun had been fire indiscriminately. This had resulted in other people present at the time only narrowly avoiding being shot and seriously injured.

Supt Watters appealed to local people to come forward in confidence with information and help bring the perpetrators of the latest attack to justice.

Anyone who was in the Hardmans area around the time of the attack and saw anything unusual is asked to contact gardaí. An appeal was also made to anyone who had seen the getaway vehicle in Drogheda.

In particular, gardaí urged the driver of a dark navy coloured taxi and a rigid low lorry with a white cab featuring the Tipperary Water logo to come forward. The drivers had stopped directly behind the getaway vehicle, gardaí said.