In 2018, 4,549 acts like Ireland’s digger-assisted robberies occurred across 20 countries

CCTV has captured an ATM theft in Dungiven, Co Derry. Three men in balaclavas used a digger to remove the ATM from the wall of a petrol station before dropping it into a van and making their getaway. 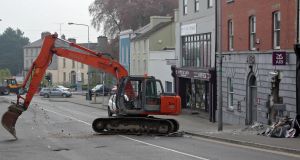 Scene of a double ATM robbery in Kells, Co Meath: While thieves in Ireland use diggers and SUVs, gangs elsewhere use methods such as gas canisters or solid explosives. Photograph: Colin Keegan

While the recent spate of ATM thefts here is shocking, it shouldn’t be surprising. In fact the only surprise is that it has taken so long for this particular crimewave to reach Irish shores.

European countries have seen a massive increase in attacks on bank machines in recent years, up 27 per cent in a year. In 2017, there were 3,584 reported incidents in 20 countries during which €31 million was taken. Last year there were 4,549 incidents, involving €36 million.

The UK has been hit particularly hard with one in five European incidents occurring there.

While thieves in Ireland prefer using diggers and SUVs, gangs elsewhere use even less subtle methods. One of the most popular tactics is to blow up the machines, using either gas canisters or solid explosives, before simply removing the cash.

Last year, more than 1,000 ATMs were destroyed in this manner. As well as costing millions in damages and stolen money, the tactic has already led to at least one death.

In October, a 19 year old died while attempting to break into a ticket machine in Halle, Germany. Seven other ATMs and ticket machines had already been blown up in the city that month.

But for the moment the digger strategy continues to be effective. Friday’s incident in Kells was the most brazen so far this year. The gang managed to extract two ATMs from concrete walls within minutes, with a 24-hour Garda station just 450m away.

Gardaí believe this brazenness masks a significant degree of planning. Kells was likely carefully selected because it had two ATMs within 50m of each other, meaning the digger barely had to move to get to both of them.

The gang must have had lookouts in the town keeping an eye on Garda patrols, investigators say. Homemade spikes were placed on the road in front of the Garda station to slow down any response in case the alarm was raised. However gardaí say this did not impact the response time.

Diggers are not easy machines to operate, especially under pressure at night time. This suggests people who have experience in construction (or in stealing ATMs).

The machines may have been fitted with GPS trackers (gardaí are refusing to say) but technology to block these devices is easily obtained. Once they got the ATMs back to a secluded area, the thieves would have started dismantling them, most likely using an acetylene torch.

Assuming they avoided any extra security measures such as explosive dye packs, the thieves would have probably netted just over €200,000.

The haul would have been much greater five years ago, sources say, until security concerns and the popularity of debit cards caused banks to reduce the amounts they put in machines.

There were two other ATMs stolen in the early hours of Friday, in Antrim and Armagh, but gardaí believe a different, northern-based gang was responsible.

It is no surprise four machines were taken on one night; it was the beginning of a four-day weekend and machines would have been stocked with much more cash than usual.

The gang which hit Kells was likely responsible for some, but not all, of the ATM thefts from shops and petrol stations in recent weeks.

Detectives are keeping an open mind but say it would be foolish to discount the role of dissident republican groups, especially given the recent increase in paramilitary activity.

The main victims of these thefts are not the banks, it’s local communities, particularly the older residents who are less comfortable using debit cards and electronic payment methods.

Some shops are now refusing to replace stolen machines, given that their premises tend to suffer massive damage whenever a theft occurs. In many cases, these are the only ATMs for miles.

The ATMs in Kells will likely be quickly replaced, but those taken from smaller villages could be gone for good.