Up to 200 ex-soldiers being investigated over Troubles allegations 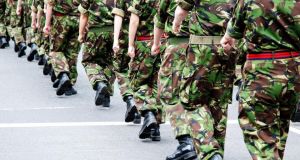 It is understood that between 150 and 200 former soldiers and police are under investigation for alleged actions taken during the Troubles. Photograph: iStock

As many as 200 former members of the British security forces are under official investigation for alleged criminal actions during the Troubles as a rift opens up between the Northern Ireland Office and the UK Ministry of Defence (MoD) over how to deal with historical accusations.

There are at least three prosecutions against British soldiers under way. A former Parachute Regiment lance-corporal, identified only so far as Soldier F, is due to stand trial for murder and attempted murder for his role in the 1972 Bloody Sunday killings. Altogether, it is understood that between 150 and 200 former soldiers and police are under investigation for alleged actions taken during the Troubles.

The figure, which is an MoD estimate, has surfaced as the British government is coming under intense pressure from Tory backbenchers – as well as thousands of current and former service personnel who protested last week against the prosecutions of troops over actions on Bloody Sunday and other occasions.

One veteran was told in a letter from his MP, a former security minister, that prosecutions of British soldiers were being driven by a “cultural Marxist hatred of our national history” on the part of the “liberal establishment”.

The comments were made by Sir John Hayes in a letter to a former soldier who posted it on an official Facebook page being used to organise a march on Friday in support of troops facing charges over killings during Bloody Sunday and on other dates.

As the MoD and Northern Ireland Office pursue separate reviews and policy priorities, Gavin Williamson, the defence secretary, has been trying to reassure service chiefs and veterans’ organisations.

His department is currently preparing a bill for the Queen’s speech that would impose a statute of limitations on prosecutions relating to alleged offences committed outside the UK and dating back more than 10 years – unless there are exceptional circumstances or new evidence.

Relatives For Justice had expressed alarm at a recent announcement in parliament by the armed forces minister, Mark Lancaster, that the MoD was working “closely with the Northern Ireland Office on new arrangements, including to ensure that our armed forces and police officers are not unfairly treated”.

The Northern Ireland Office told the group in an email that what Lancaster was referring to was not at odds with what the Northern Ireland secretary, Karen Bradley, had said to them privately and what it said the MoD was “considering in an international context”.

“What we want is a way forward which provides for evidence of wrongdoing to be investigated and, where evidence exists, prosecutions to follow,” the Northern Ireland Office letter reiterated.

Paul O’Connor, director of the Pat Finucane Centre in Derry, which supports the families of Troubles’ victims, also recently had a meeting with Ms Bradley at which he sought reassurances that there would be no amnesties for soldiers involved in the Troubles.

“She was very clear that she would not introduce any amnesty and that the MoD was doing its own thing and that was about Iraq and Afghanistan,” he told the Guardian, adding that the MoD is “playing games but the problem is that is unsettling people in Northern Ireland”.

A UK government spokesperson said: “The system to investigate the past needs to change to provide better outcomes for victims and survivors of the Troubles and to also ensure members of our armed forces and police are not disproportionally affected. This is why we have consulted widely on the system in Northern Ireland.

“The 2017 manifesto made clear any approach to the past must be consistent with the rule of law. We have always said that we will not introduce amnesties or immunities from prosecution in Northern Ireland. The Ministry of Defence is currently looking at what more can be done to provide further legal protection to service personnel and veterans, including considering legislation.” – Guardian